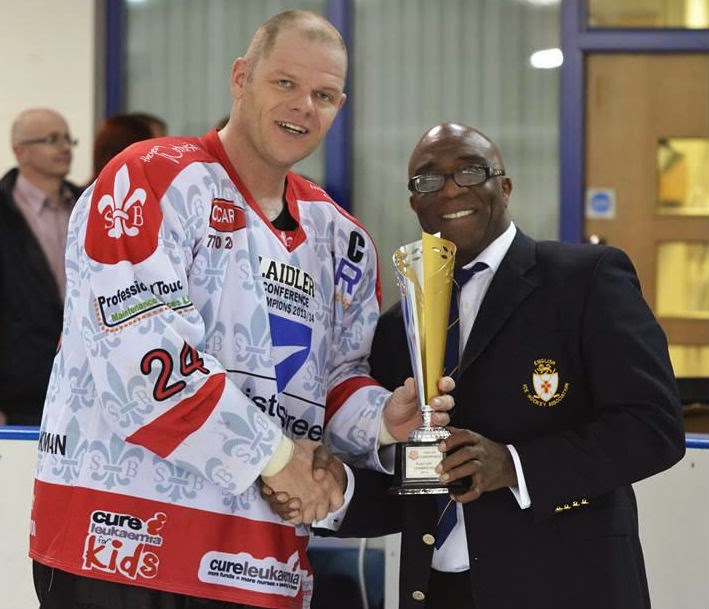 Barons comfortably won the Laidler title last season, but with no promotion place on offer they stayed at the lower level.

With promotion/relegation reinstated, Barons are yet to drop a point this season and look certain to go up to Moralee D1, leaving Vice Chairman Andy Gordon with his eyes fixed firmly on the future.

He commented: “Technically we could buy our way into the English Premier League, but this would mean we’d need a lot of money. We’d also lose a lot of players as most would not want to commit or could not commit to playing two games most weekends and training most days.

“We need to have a sustainable plan to keep from going from boom to bust. There are many rinks up and down the country that have had great plans in the past and are now just memories, including at Solihull.

“Let’s look forward to the rest of this season – crowds are officially up in numbers from last season; the Barons are undefeated for over a year – and look forward (fingers crossed) to next season in Moralee D1 with the best team and the best supporters around.”

In Moralee D1, Manchester Minotaurs will look to pick up their first points of the season as they welcome Sheffield Spartans to Altrincham on Saturday. Solway Sharks face-off against Whitley Warriors and Blackburn Hawks play Sutton Sting.

Billingham Stars are in British Challenge Cup action on Sunday evening as they welcome the Hawks to Teesside. Stars have faced their visitors twice already this season, losing heavily in Lancashire in both the League and Cup.

Stars’ Director of Coaching Terry Ward is keen to set the record straight: “I don’t need to get the lads up for this one – if I did have to say anything to them in the dressing room then something would be wrong.

“We owe these guys and the boys know it. It won’t be easy, but there’s no way we want Blackburn strolling in here and just taking the points. We’re going to give them a game.

“They’ll be confident of the win I’m sure, but we need to give them something to think about. If we do the things that we have been doing – working hard, forechecking hard, chasing everything down – then we will be much better placed to get a result.

“This is our pad, it’s a little smaller, and it will give us the opportunity to shut their dangermen down and frustrate them, get them to make mistakes. If we can keep working the way we have been doing lately then we’ve got every chance.”