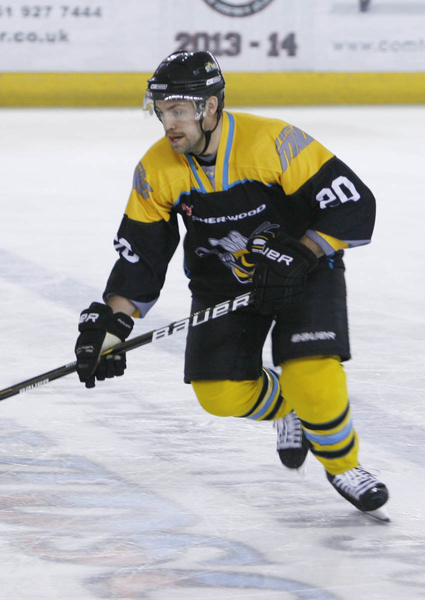 Solway Sharks continue the defence of their NIHL North crown on Sunday with a tricky looking trip to Blackburn Hawks.

Sharks made a slow start to their Moralee D1 campaign, but two wins earlier in the month have kept them in touch with the leading pack.

Head Coach Martin Grubb said: “We’re looking forward to the game on Sunday and we want to keep our decent league form going.

“We’ve added depth by bringing Jens Engelen and Josh Hay in, and getting Frazer Goldie back is like a new signing so we now have more options in our line-up.

“Jared (Owen) has built a really good team and they’ve shown quality and consistency so we know this will be a tough game, but we go into it in a confident manner and will be looking to claw some points back and prove we’re back in the title hunt.

“I’m sure it will be a close, physical game and it will be a good advert for our league and we will be ready to play and stop the Hawks unbeaten start in the league.”

Billingham Stars are also in action on Sunday as they meet Sheffield Spartans, while Sutton Sting and Whitley Warriors face-off the previous day. The teams met at Hillheads earlier in the season, with Warriors sealing a 4-2 win, but Sting defenseman Scott Glover (above) believes they can gain revenge back on home ice.

“This season has been difficult so far,” said Glover. “We’ve lost some good players over the summer, whilst adding a few new ones and it all takes time for them to gel.

“All the guys have work, family and other commitments so it’s hard to set the lines as it’s a different team each week. Matt (Darlow) is doing a great job and the 8-1 win against Billingham really showed what we can do when we turn a full team out.

“The losses at Whitley and Billingham were disappointing, but having gone with two lines we came out of both games with our heads held high. If we have a full team this weekend there’s no reason why we can’t beat Whitley and grab those two valuable points.”

There’s one other game on Saturday, with Solway facing the EPL’s Telford Tigers in the British Challenge Cup.

“Last weekend we had two tough games, especially heading to Solihull with 11 skaters, but I still feel we were unlucky to come away from the weekend without any points,” said Dippnall.

“This week we have another tough double-header facing Nottingham, who we always have good close games with, and Telford who we’re a bit unsure about. Judging from their previous results they look like a very strong team. We’re looking for four points but we know it will be a big ask.”

“Having played 17 games already I don’t think we’ve had the best start to the season as our results show,” said Jones. “We lost a few great players from last season, but we’ve added some great replacements.

“The team is starting to come together now and I think we’ll start picking up a lot more wins. Most teams have improved so much from last season, and that has shown with us struggling to get going and losing some big games.”

“We go to Solihull on Sunday which is a tough rink to go to, and with them not losing a game yet it’s going to be very a hard game. I’d love to beat them in their own rink, but we’ll have to be at our very best to have a chance of that.”

The remaining D2 games see Telford play Sheffield Senators and the Eagles meet Bradford Bulldogs on Saturday, while Sens face-off against the Lions on Sunday.