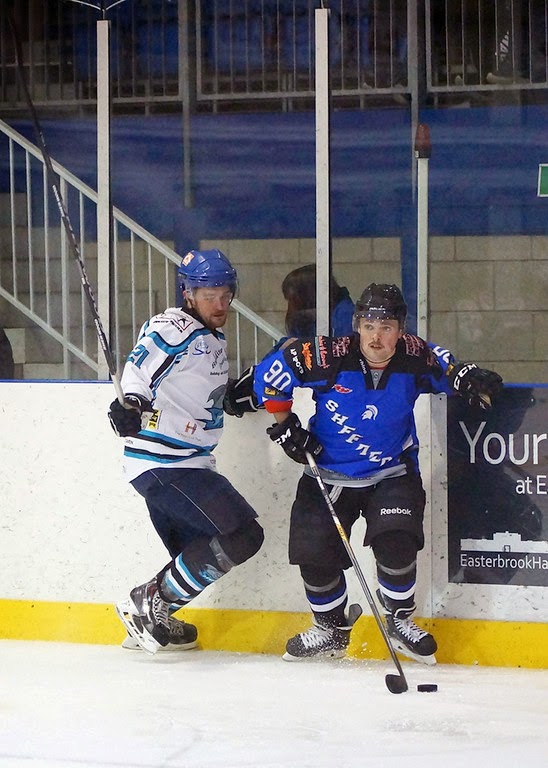 Sheffield Spartans bid to return to winning ways in NIHL North this weekend as they welcome Manchester Minotaurs to IceSheffield.

Spartans made a solid start to their Moralee D1 campaign, losing just one of their opening four games, but defeats in recent weeks to Blackburn Hawks and Solway Sharks have seen them drop to sixth in the table.

Although Saturday’s opponents are still without a point this season, defenseman Jonathan Kirk is taking nothing for granted.

“There are no easy games in the league this year and with the shortened season, there’s less room for error,” said Kirk. “We need to start putting points on the board and Manchester won’t be light work.

“They’ve taken leads into the second period, but seem to run out of legs towards the end of games, so we’ll be looking to set them back and gain an early lead.

“We’ve noticeably improved from last season with the addition of a few younger players such as Ben Jones and Charlie Thompson, plus a few of the guys returning from time out of the game. We’ve had a few results go against us with big scores that don’t really reflect how we’re playing. We just seem to be getting punished for minor lapses of concentration and we’re working hard to fix it.

“We showed in the games against Whitley and our first home fixture against Solway that when we play the full 60 minutes of a game we can compete with anyone, but the task now is to play every game like that. Our goal is to make the play-offs and I personally think if we don’t we’ve disappointed as a team.”

Two D1 teams are in British Challenge Cup action this weekend, with Solway travelling to the EPL’s Manchester Phoenix on Saturday, while Billingham stars face-off against Sheffield Steeldogs the following evening.

In Laidler D2, Telford Tigers NIHL face a weekend double-header as they look to close the gap on leaders Solihull Barons. On Saturday they host Coventry Blaze, before a trip to second-placed Sheffield Senators on Sunday.

Both of Telford’s previous games against those sides have ended in narrow one-goal wins, and Head Coach Scott McKenzie is expecting more of the same this weekend.

He said: “Coventry are a tough side, despite their league position, and have a lot of experience in their line-up. It will be a very tough game at home against them. Sheffield are also a very hard-working team. We beat them by the odd goal at the start of the season, but they’ve improved a lot.

“We’ve also made a lot of improvements as well, so it should be an exciting game. With having a few weeks without games, we’ve been working the guys pretty hard at training. I’m really happy with the way they’ve responded. The whole squad is excited to get back into some game time. Hopefully we’ll end the weekend with another four points.”

Sens are also in action on Saturday with a home game against Widnes Wild. The remaining D2 games are all on Sunday, with Solihull meeting Widnes, Deeside Dragons facing-off against Blackburn Eagles and Nottingham Lions playing Hull Jets.