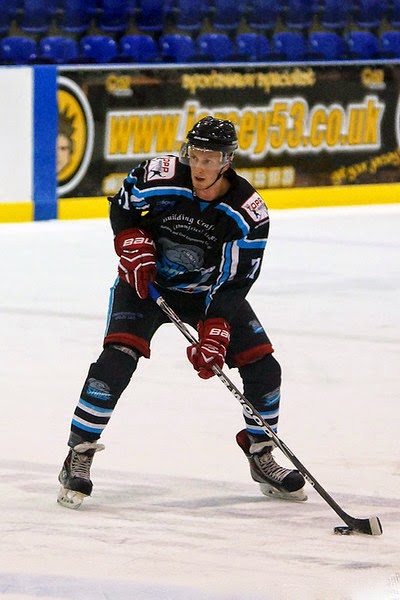 The 22-year-old defenseman (left) made an immediate impact on his Moralee D1 debut last weekend, picking up an assist as Sharks ran out 5-1 winners at Sutton Sting.

The Belgian international has arrived in Scotland with an impressive CV. He made his senior debut aged 14, going on to claim a title-winning medal with HYC Herentals in 2008/09.

The following season saw Engelen move to Tilburg Trappers in the Dutch Eredivisie, but he returned to Herentals in 2010 as they joined the Dutch league set-up. In his five years playing in the Netherlands, Engelen made almost 200 appearances.

In addition to his domestic career, Engelen has also represented his country from U18 through to senior level, playing in 14 world championship competitions.

He commented: “Representing my country is great – I love going to championships! I also played against Josh (Hay) a couple of times. I was surprised in a good way to see that I was going to play in the same team with him because he was always a guy to watch at championships.

“Coming to Scotland is my first time being away from home and will help me grow up even more. I like to practice and do some power skating and stick handling. I’m planning on going on the ice as many times as possible. Hopefully I will improve and get as high and as far as I possibly can.

“I have good experience playing in a good league and playing all those championships. I think I can help the Sharks get better in the D-zone. Strong defence wins hockey games I believe.

“I think every player in our team is really important. They all have their role and if we all play our role in the team, and stick together as we can, we’ll be a good team. I kept my eyes on Josh a lot since I’ve played against him a couple times and he puts in a lot of work during games, at practices and off the ice.”

In Laidler D2, leaders Solihull Barons travel to Coventry Blaze on Saturday and Widnes Wild play Deeside Dragons. Blackburn Eagles host Hull Jets on Sunday, while Nottingham Lions look to bounce back from last week’s defeat on home ice to the Dragons as they travel to Deeside.

Lions led 2-1 going into the final period, but Dragons rallied to secure a 4-2 success. Head Coach Matt Bradbury is hoping to see his team put up a much better showing this weekend.

“We didn’t play well last week, but the good thing is we get a chance to get straight back at Deeside in their own barn,” said Bradbury. “If it means something to the guys, they’ll hopefully be smarting from the way they played, so hopefully they’ll come out and give a better performance.”