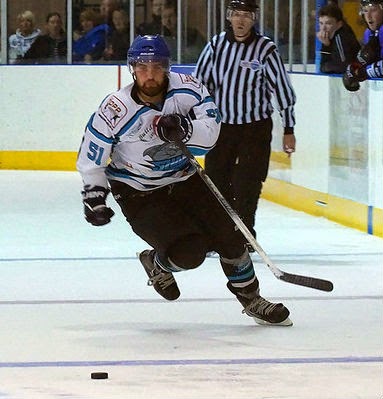 Reigning NIHL North champions Solway Sharks begin the defence of their Moralee D1 title on Saturday as they welcome Blackburn Hawks to Dumfries.

Sharks have made a stuttering start to 2014/15, winning two of their six British Challenge Cup ties played so far.

However, last week’s 4-2 win at Billingham Stars was a welcome return to form and forward Struan Tonnar (left) wants to keep the momentum going.

“With the changes we’ve had over the summer it took us a while to get some real traction, but we’re certainly getting there,” said Tonnar.

“We’ve started to find our feet and people are starting to fill their roles well, and along with the young guns stepping we’re still a good team. Don’t have anyone tell you we’re not.

“Every game we’ve played so far has been hard and so will every game to come. Teams have signed well and are really stepping up the standard of this league. All we ask of our guys is to work harder and smarter than the rest, and if we manage that I’m sure we’ll still be the team people want to beat.

“Blackburn are a fast, hardworking team that make you work for every puck and if we aren’t ready from the first whistle we’ll find ourselves on the back foot. We want the win as much as they do and it will be a battle, so we have to come with everything and take the game to them.”

Sharks are also in action on Sunday at Manchester Minotaurs, while Sheffield Spartans host Whitley Warriors the previous day. Hawks meet Stars in the Cup on Sunday.

This week’s headline game in Laidler D2 is on Sunday as leaders Solihull Barons face-off against Telford Tigers NIHL at Hobs Moat Road. Both teams enter the weekend with 100% records and Barons’ Head Coach Darren Bellerby expects a difficult game.

He commented: “Our season so far is going well. Niklas Ottosson has been the icing on the cake and he, Tom Soar, Josh Bruce, Joe Henry and Richie Slater are scoring goals for fun. I’m yet to have a full squad to choose from, but we have a lot of strength in depth.

“The league is by far the strongest I’ve seen, with teams like Blackburn, Sheffield and Widnes all adding numbers and ability, so we need to be on top of our game when we meet them. We want to bow out of D2 on a high, hopefully with a bit of silverware, but retaining the core of these players is my main aim so we can compete with teams in NIHL1.

“Sunday’s game will be a big test for us and it’s been a long time since Barons have met a Tigers team since leaving the EPL. They’re still unbeaten and have a great junior system producing talented players, plus a few older heads alongside them which should make for a great derby game.”

Tigers also hit the road on Saturday as they travel to Blackburn Eagles. The hosts are unbeaten on home ice this term and Player/Coach Scott Barnett is pleased with the start they’ve made. “To double last year’s points total so early in the season is a good position to be in,” said Barnett.

“We’ll not stop there – the aim this year was to jump up the table and with the start we’ve had this is still achievable. I don’t see anyone taking points off Solihull, but it will be interesting to see how the season pans out for the rest of the teams. Our focus will be consistency, which is the only reason we’ve not won more games already.”