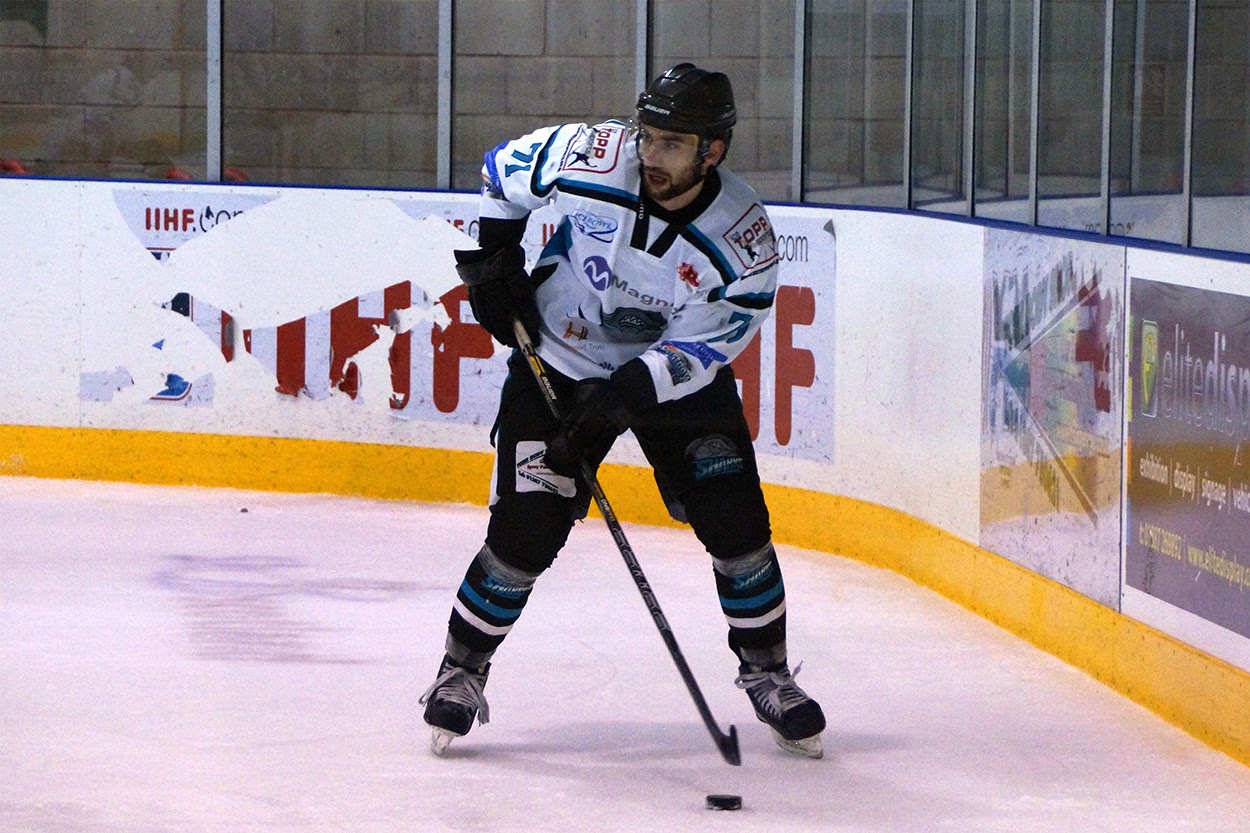 Solway Sharks bid to strengthen their grip on NIHL North (Moralee Conference) on Saturday as they welcome Blackburn Hawks to Dumfries.

Sharks hold a three point lead over the chasing pack and have seen their title challenge boosted by the return of Pavol Melichercik (left).

The Slovakian forward was a popular figure in his last spell with the Sharks and he says he’s delighted to be back: “I stayed in touch with Martin Grubb after I left Sharks, so when the chance came for a comeback I was really happy. My wife also said it is OK because she knows how much I missed playing.

“I’m looking forward to this weekend. We worked better on practice last week and our game is improving so we feel ready for the Hawks. They have a strong team with big players and I respect them, but we feel confident and will do everything for victory.”

Sheffield Spartans and Sutton Sting do battle on Saturday, with both looking to boost their play-off hopes. Spartans currently sit five points behind fourth-placed Sting in the race to reach Dumfries.

Sheffield’s Jonathan Kirk is confident they can keep the pressure on the teams above them: “We’ve definitely stepped our game up to match a lot of the higher end teams. I think we showed this against Solway and Billingham a few weeks ago.

“Sutton have been on a hot streak, but we’re looking to seal the series between us and bounce back from the heavy defeat they inflicted in our last meeting. They have a good skilled team, but if we play like we can we can skate with anyone in the league.”

The big game in Laidler Conference is on Sunday as title chasing Deeside Dragons travel to Coventry Blaze. Dragons are three points behind leaders Solihull Barons, with Blaze a further seven points back in third, leaving both teams desperate for a win to keep their seasons alive.

Dragons have battled against injuries in recent weeks, but Coach Steve Fellows is proud of his team’s efforts: “It’s fair to say we’ve had a number of challenges to overcome. At times we’ve had three or four of our top scorers sidelined with injuries and we’ve had to mix up the lines, but the player have stuck together and worked even harder.

“There aren’t many teams who can put six goals past Coventry in 20 minutes of hockey like we did in the third period the last time we met. Most teams would have thrown in the towel at 6-1 down, so to beat them 7-6 was a fantastic night and one we all won’t forget. Hopefully we can start on Sunday in the same manner we finished last time. Facing off close to 9.00 pm away from home is always difficult, but this is just another challenge we have to overcome.”

Following a solid start to the season, Blaze have won just three of their last eight games. After blowing a five-goal lead in their last encounter, forward Josh Gent is out for revenge: “We’ve had our ups and downs this season. Consistency has been hard to find as we’ve played games with short benches, but I still believe we are a top two team. Deeside will be a tough game – we have a point to prove and I have high hopes we can grab the win if we keep it simple and play hard.”