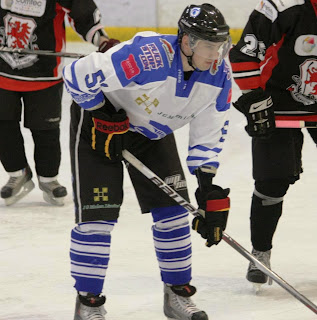 The halfway point in NIHL North sees a number of teams in contention for silverware and play-off positions. Solway Sharks are favourites to collect the Moralee Conference title and a spot in the end of season shoot-out in Dumfries, while six other teams still have hopes of joining them there.

Two of them meet in Sheffield on Saturday as the Spartans host Whitley Warriors. The home team are hoping to avenge a 7-5 loss at Hillheads three weeks ago and forward Nick Whyatt (left) says the play-off race is wide open.

“We’ve had a tough couple of weeks where we’ve pushed teams all the way and been unlucky not to come back with any points,” said Whyatt. “With more tough games coming up it’s important to pick up maximum points this weekend to get some confidence and momentum behind us. We’ve competed with every team in the league this season, apart from a couple of occasions where we never really got going. Every game is a four-pointer for us if we’re to make the play-offs.”

Sutton Sting moved up to fourth last week with their seventh win in nine games and will look to extend that run on Sunday at Telford Titans. Coach Ian Johnson admitted it’s a must-win game: “We’ve built some momentum of late, and although I’m not completely happy with how we’re playing over 60 minutes, the lads have really settled and know what it takes to win games. Inconsistency has been our main issue, but both netminders and our defenseman have found their form which has improved our plus/minus.

“Telford are finding it tough this year, but I’ve nothing but admiration for them. They decided to stay in the tougher Conference knowing full well that teams around them were going to be stronger. I expect them to have a strong roster at home and we’ll be taking nothing for granted. We have a game plan, so hopefully we can continue our recent good form and apply more pressure to the teams above and around us.”

On Saturday Manchester Minotaurs face Blackburn Hawks in the KD Flavell & Sons Northern Cup, while on Sunday they travel to Billingham Stars in the league.

Just four points separate the top four in Laidler Conference with Deeside Dragons currently leading the way. Second placed Solihull Barons could overtake them this weekend as they travel to Blackburn Eagles on Saturday, but they face a team who have improved as the season has progressed.

Eagles recently won their first game in over two years and Coach Scott Barnett believes more points will follow: “This year’s Eagles team is nothing like it has been in previous years. I have a hard-working roster with a never-say-die attitude and we’ve earned a lot of respect by matching the big teams in long periods of play.

“As a development year things are very much on course and teams know when they play us we’re up for any challenge. We’ve got two difficult games over Christmas against Solihull, but I’m confident these will set us up to grind out some more points in the New Year.”

Barons are back in action the following evening as they host Nottingham Lions.Sunday’s remaining game sees Hull Jets face-off against Sheffield Senators.