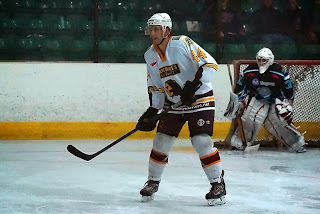 Whitley Warriors bid to extend their winning run to three on Sunday as they travel to face Sutton Sting. Warriors sit third in Moralee Conference after last week’s stunning comeback against Blackburn Hawks, where they overcame a three-goal deficit to run out 4-3 winners.

Forward Adam Reynolds fired two goals to haul Warriors back into the game and says they can take heart from their final period performance: “With a few key guys missing we showed great team spirit and it was nice to get the win. Sutton will be a tough game as they’re a decent team and can punish anyone if you’re not switched on for 60 minutes like our last trip. But after last week’s win we’ll be going in full of confidence we can get another two points.”

Telford Titans face Manchester Minotaurs looking to collect their first points of the season. Titans have lost all 14 games so far, but Head Coach Rob Blakemore believes they could soon turn the corner: “I’m hoping the guys will be up for this one with a point to prove. We managed to match them for a period last time and I believe with the right tactics and work ethic we can can give them a tough game. Hopefully we can come out with the result we need to kickstart our season.”

Billingham Stars will look to keep their title challenge on track at Blackburn Hawks. Stars are four points behind Solway Sharks at the top of the table and team boss Terry Ward expects a tough game: “We don’t seem to be able to travel to Blackburn at full strength. On this occasion we have players on GB duty at the World University games in Italy, but as we saw last time we’ll battle until the final buzzer and give them a game. Their home form is keeping them in contention, and I’m sure Jared Owen will have had words with his guys last week after they squandered a three goal lead at Whitley.”

The top two in Laidler Conference go head-to-head on Sunday as Deeside Dragons face Solihull. The Barons are three points behind with a game in hand and Dragons’ defenseman Matt Wainwright expects a difficult battle: “It’s a massive game as they’re a quality side. We’ve had a tough few weeks facing Nottingham, Coventry and Solihull, but our performances have shown the character in the team. We need to bounce back from the loss at Solihull and we’re desperate to take the points in front of our own fans.”

Barons have strung together an impressive seven game winning run and netminder Sam Hewitt wants another big performance: “It’s an important game for both teams. We could close the gap to one point or they could go five clear, but we’re full of confidence after our recent results. You can’t predict a score when you have two teams performing well – it all comes down to who does the business when it matters.”