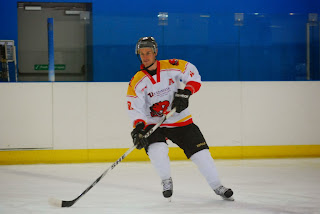 Billingham Stars face a crucial weekend in NIHL North as they look to keep pace with Solway Sharks. Currently second in Moralee Conference, Stars are eight points behind Solway with two games in hand.

On Saturday they travel to face Manchester Minotaurs, before returning to home ice the following evening against Sheffield Spartans and defenseman Andy Munroe is keen to pick up four points: “The season overall is going reasonably well, but we’ve dropped too many points in the last couple of weeks which will really put the pressure on our head-to-head games with Solway.

“We can’t focus on that though, as we can’t look past any of our opponents. It’s a cliché but we really do need to just take each game as it comes and focus on getting as many points on the board as we can. It’ll be a tough weekend, with Manchester’s imports showing themselves to be a threat and we haven’t played Sheffield since they signed Stuart Brittle, who I’m sure have a bearing on the game.

“We’re looking forward to a two-game weekend, and hope that will bring a bit more consistency into our play than we’ve had over the last few weeks. It was good to see some of the younger guys take advantage of the extra ice time last weekend and hopefully they can carry that over into the next set of games.”

Minotaurs are much improved this season, but have found results hard to come by in recent weeks. Forward Brian Worrall said: “It’s been a tough month or so, not just on the ice but off it as well – especially last week. It’s never easy losing your captain mid-season for unknown reasons to another team in our league. He was a massive part of this team and leaves a big hole to fill.

“We have to stick together and knuckle down. It’s taken time for us to gel, but we’re getting there and I believe we’ll still be competitive and improve as the season goes on.”

Third plays sixth on Sunday as Whitley Warriors host Blackburn Hawks. Warriors bounced back from a run of three defeats with a win against Sheffield last week, while the Hawks have won just three of their last twelve games.

Whitley captain DJ Good said: “It’s going to be a tough game but one we’re looking to win. The two teams have a lot of history and rivalry between us so it should be a really good contest. We’re coming up to the midway point of the season and it’s time for us start playing like we’re capable of and ending the season very strongly.”

Sunday’s big game in Laidler Conference sees Nottingham Lions face-off against Coventry Blaze. Both teams have struggled for consistency this season and Lions’ netminder Alan Levers is keen to string together a winning run: “We put themselves in a strong position to be in contention for the league title after some good results at the start of the season.

“We’ve been working hard in recent weeks at training on systems to reduce the mistakes which have cost us in recent matches. This weekend’s game will be another tight match, similar to the previous one when we beat them by the odd goal back in September.”

Forward Charlie Hammerton bagged a hat-trick last weekend against Blackburn Eagles and is hoping for another good performance as he looks to establish himself on the Blaze roster: “Things are going well – the majority of us are young and we’re all still learning. I think we’ve bonded well and work well for each other.

“We’re a team that strives for progression which is what we’re doing and everyone is developing every week. Scoring three was a great feeling but it wasn’t about myself, it was about us getting the points we needed. After the setback of losing to Solihull and Deeside it was important to get back on track. We’re going to take the game to Nottingham and hopefully come away with the win.”

The remaining two games see the Eagles host Sheffield Senators in the league, while Great Britain U20s play Solway in their final warm-up game before next week’s IIHF Ice Hockey U20 World Championships at Dumfries.