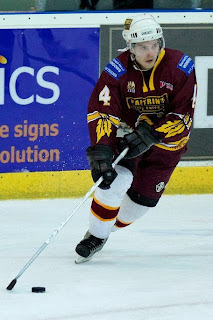 Whitley Warriors face a tough trip to NIHL1 North (Moralee Conference) leaders Solway Sharks on Saturday as they bid to bounce back from last weekend’s collapse at Billingham Stars. Warriors led 3-1 with little over two minutes remaining, but a stunning Stars fightback saw them claim a 4-3 win.

Despite the loss forward Mark Good (left) is pleased how things are going: “We’re all obviously very disappointed with the Billingham result, but we’ll take a number of positives from it into this weekend.

“Billingham had a bit of luck in the last two minutes, but before that we’d been the better team. Our results and performances in October and November have been good and we’ll be going up to Scotland with the intention of taking the two points.”

Billingham will look to keep up the pressure on Solway on Sunday as they travel to Blackburn Hawks. Stars’ boss Terry Ward expects another tough game: “We are missing some key guys on our trip to Blackburn, so we’ll have to make some alterations to our lines, and again we’ll look to some of the younger players to make an impression.

“Blackburn have had some close games this season, it’s not like they’ve been beaten by any huge margins, maybe one or two goals, but that seems to be the story across the top five teams, and that makes for an interesting league.”

The remaining Moralee game is on Saturday as Manchester Minotaurs host Sutton Sting.

The top two in NIHL2 (Laidler Conference) clash on Sunday as Deeside Dragons face-off against Nottingham Lions. Dragons staged a remarkable comeback last weekend as they recovered from 6-2 down to win 7-6 against Coventry Blaze, but Coach Steve Fellows is keen to keep his players focused:

“It’s easy to be complacent after a decent result, but it’s my job to keep their feet on the ground. Nottingham have struggled a little bit on the road and if we can start this game like we finished the last we’re more than capable of beating them.”

Lions moved three points behind Dragons after two wins last week and Coach Matt Bradbury is looking forward to facing the leaders: “Deeside are no fools – they know what they’re setting out to achieve this year, but we’ll be up for it. The league’s proving to be very consistent and in front of what should be a big crowd I’m expecting a great game.”