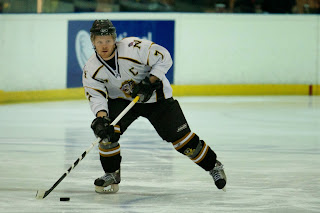 Solway Sharks in action on two fronts this weekend as they continue the defence of their league and cup titles.

The NIHL1 North (Moralee Conference) leaders host Blackburn Hawks in the league on Saturday, before travelling to face Sutton Sting on Sunday for a game which doubles as a Northern Cup fixture.

Sharks have lost just once all season and Coach Martin Grubb is keen to keep their good run going: “I’m happy with the way our season has started, as it was always going to take time to gel as a much changed team. The league has improved and you can’t afford to take a game off.

“This weekend will be a huge test against two very good teams and recently we’ve been missing some guys but still winning, so it’s important to maintain our momentum and we’ll be looking for two wins once again.”

Sutton are at Sheffield Spartans on Saturday looking to build on last weekend’s four point haul. Sting started the season slowly, but forward Chris Colegate (above) thinks they’re poised to move up the table: “Ian (Johnson) has built a really strong team, but it’s taken time for the lines to settle. We’re really coming together now and putting up some good results.

“Over the past few weekends my line with Adam Robinson and Thomas Stuart-Dant has really started to gel, while Chris Sykes seems to have found his scoring touch. After a year off I’ve noticed the league has definitely improved – all the games are competitive and I think it’s good for young lads coming through to be pushing themselves against quality opposition week-in, week-out.”

Second meets third on Sunday as Billingham Stars face off against Whitley Warriors. Both teams are bidding to bounce back from defeats and Stars’ boss Terry Ward says a game against their local rivals is the ideal chance to put last week behind them: “The derby atmosphere always lifts the players and fans – there’s a lot to play for in this game and I know both sides will be up for it.

“It’s Simon Leach’s first trip back to the Forum and I know he’ll have his players psyched up ready to do battle, as he’ll be keen to turn his game in hand into points.”

The remaining Moralee game is on Sunday as Telford Titans meet Manchester Minotaurs.

The top two in NIHL2 (Laidler Conference) meet on Sunday as Deeside Dragons clash with Coventry Blaze. Four points separate the teams and Dragons’ boss Ian Foster says it’s a big weekend: “We aim to win every four game series, so it’s vital win on Sunday after losing 5-0 at Blaze in our first meeting. We were bitterly disappointed with our performance, but it probably helped us focus after a relatively easy start to the season.

“Coventry have a young squad full of good skaters with some experienced guys thrown in, but I’m not sure how they’ll travel with both Elite Blaze and MK Lightning having games, as many of their lads are on two way contracts. We were missing a number of guys last week, but hopefully some will return.

“Dan Söderberg-Andersson is still out due to a shoulder injury and looks to be out for some weeks. We’re confident we can keep our unbeaten home record and the possibility of extending our lead to six points is more than enough motivation.”

Nottingham Lions are at Sheffield Senators on Saturday, before facing Hull Jets at home the following night. Solihull Barons face a weekend on the road as they travel to Hull and Widnes Wild.

Blackburn Eagles bid for their first points of the season as they host Widnes on Saturday. Eagles narrowly lost to Hull in their last game and Coach Scott Barnett believes it’s only a matter of time before they pick up a win: “Rebuilding a team is always difficult, especially when we’re not the only team representing the club. I’m happy with the progress the guys have made this year.

“Scores are becoming closer, and we’re making things difficult for the bigger budget teams in the league. We’ve earned a reputation as a hard working team that never gives up. I’m confident if we continue to do that we’ll take points very soon.”