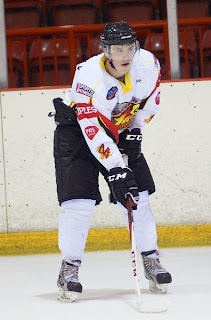 The contest has been given extra spice with Sting confirming the signings of Bobby Streetly (left) and Myles Dacres from their opponents. The pair were two of three players benched by Hawks last weekend and Streetly admitted they were pleased to move on:

“Sutton are an ambitious club and we’re happy to be a part of it. Personally I’d like to thank Blackburn for what they’ve done for me over the last two years, but it’s time to go and I’m ready for the challenge ahead.” Sting Coach Ian Johnson added: “They’re just young lads who clearly want to improve and add value to a team. I’m delighted to have them on board.”

Sutton are in NIHL1 North (Moralee Conference) action on Sunday as they face-off against leaders Billingham Stars.

Sheffield Spartans bid for revenge on Saturday as they travel to last week’s conquerors Solway Sharks. Spartans led going into the final period, but Sharks recovered to seal a 4-3 win, leaving defenseman Ross Jordan keen to set the record straight this weekend: “This season has been a mixed bag for us. We had a good weekend beating Whitley Warriors and Sutton, followed by a decent draw with Blackburn.

“Since then we seem to have lost our edge and missed out on points that should have been ours. It will be tough going to Solway, but the boys are up for it after missing out the win last weekend. We have a couple more gears in us and I feel we can beat any team in the league.” Spartans are at home to Telford Titans the following day, while Solway travel to Whitley.

Manchester will look to bounce back from a heavy defeat at Whitley last weekend as they travel to face the Hawks on Sunday. Minotaurs top scorer Lukas Zeman has hit 23 goals so far this season and says the onus is on the home team to perform.

“I expect a tough game at Blackburn which will be interesting for the fans,” said Zeman. “It is a derby so I hope the atmosphere will be great. Of course Blackburn are at home so they will be under pressure and we are ready to take another challenge.”

“Things are going better than people imagined. As a self-funded team with a large influx of new players we knew it would take a month or so for our lines to gel, but to be sitting in second we couldn’t be happier. Our next focus is Solihull and we need to take points off the top four teams if we are to challenge for the title.”

C2C understands Barons could be without Josh Bruce for the game. The influential forward is believed to be on his way to the EPL’s Telford Tigers.

Deeside are at Sheffield Senators with the hosts boosted by the signing of a new import. Coach Andy Ellis says the new man can help push his team up the table: “We’ve had a tough start winning only one of our opening nine games. However, I’m really encouraged by our recent performances.

“We have a few injuries at the moment so we’ll be icing a couple of juniors on Sunday. New signing Sergej Jegorovs also makes his debut. Sergej played most of his hockey for DHK Latgale in Latvia and he had a brief stint in Finland. He’s a two-way defenseman and will add more experience to our young team.”