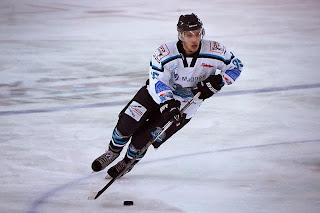 Last year’s top two in NIHL North meet on Sunday as Solway Sharks travel to face Billingham Stars. The two teams met on the opening day of the season with Sharks running out 3-2 winners.

The Dumfries outfit remain unbeaten in NIHL1 (Moralee Conference) while Stars have struggled for consistency, but Solway sniper Craig Thurston (left) feels his team still have room for improvement: “We’ve had a good start to the season, winning all three games, but I believe we can step it up a lot more. We’ve already beaten Billingham at the Shark Tank and we’ll need to keep the tempo we’ve had in our other games if we are to get a result there.”

Whitley Warriors face a weekend double-header as they look to bounce back from last week’s defeat at Sheffield Spartans. They travel to Manchester Minotaurs on Saturday, before meeting Telford Titans at Hillheads the following evening.

Warriors forward Karl Culley returned to the club from Billingham in the summer and is delighted to be back where he feels he belongs: “As soon as Simon (Leach) went back it was pretty much a certainty I would return with him. We had a decent start until a little setback last weekend, which we can’t let happen if we are to push for a play-off spot.

“We’re looking forward to this weekend’s games and want to take maximum points, but we know Manchester are grinding out some decent performances against the so-called top teams so it will be a tough test.”

The top four in NIHL2 (Laidler Conference) do battle on Sunday, with Coventry Blaze hosting Deeside Dragons, while Solihull Barons meet Nottingham Lions. Barons lost 2-1 in Nottingham during September and forward Richard Slater is keen to set the record straight: “We had a lot of changes over the summer, but there’s a good atmosphere in the dressing room with the team gelling nicely.

“It was disappointing to lose to Nottingham, but it was a close game that could have gone either way. I think we’ll be able to avenge our defeat on home ice. Any one of four teams could win this league and I think everyone is capable of taking points of each other.”

Sheffield Senators are at home twice over the weekend welcoming Widnes Wild on Saturday, while Blackburn Eagles are the visitors the following day.