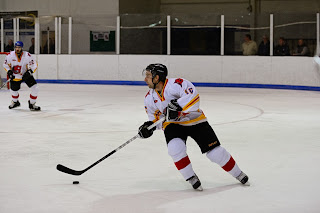 Billingham Stars face a weekend double-header as they bid to spark their NIHL North season into life.

Stars have lost two of their opening three games and face a tricky looking trip to Sheffield Spartans on Saturday, before meeting Manchester Minotaurs at home the following evening.

Assistant/Player Coach Michael Bowman (left) thinks Stars have a tough task ahead: “Sheffield have a bit of experience and a very good junior development set-up and I’m sure they’ll work hard all game, especially at home where they’ll be difficult to break down. Manchester seem to be picking up some very good results. Lukas Zeman is one to watch and we need to make sure we know where he is all the time.”

Sutton Sting aim to recover from their opening day defeat to Manchester as they host Telford Titans on Sunday. Sting enjoyed a free weekend last week and forward Chris Sykes thinks they will bounce back: “We’re all raring to hit the gas pedal and lay down a marker for the league. It’s a long season and we’ll fight for top spot all year. This weekend we have Telford at home, which will be a tough game. We’ve worked hard on our systems and got to grips with each other in training this week. Hopefully we can pick up where we left off last season and get some points on the board.”

Blackburn Hawks finally get their season underway as they travel to Manchester on Saturday, while on Sunday they welcome the Spartans to Lancashire.

Deeside Dragons and Widnes meet on Sunday, with Wild looking to gain revenge for their 9-5 loss in North Wales two weeks ago. Defenseman Calum Ruddick thinks Wild have the ability to be competitive in the NIHL: “We’ve got some good players and things are starting to gel with the team on and off the ice. I’m looking forward to the game at Deeside. They’re a strong team, especially at home, and have started well again this season. However, we have confidence in ourselves and don’t fear any team in the league.”