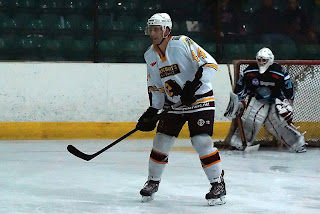 The big clash in NIHL1 North (Moralee Conference) this weekend is on Sunday as Whitley Warriors host Billingham Stars.

Warriors started the season with a win at Telford, while Stars lost narrowly at Solway Sharks before comfortably disposing of the Titans back on home ice. The game marks a second home debut for Warriors’ forward Adam Reynolds (left) who has returned to Hillheads from Solway.

Reynolds is relishing the challenge ahead: “It was vital to get off to a good start against a young Titans team who sprung a few surprises at home last year. I’m looking forward to this weekend as it’s the first derby game. We’re ready for it and regardless of the result I think both teams will be right up there come April.”

Telford will look to bounce back from last weekend’s defeats as they face-off against Sheffield Spartans. Ryan Stanton is one of the more senior names in a roster packed with youth and thinks results may be difficult to come by in the opening weeks of the season.

“Last weekend was very tough against Whitley and Billingham as we only had two training sessions beforehand,” said Stanton. “We know the first couple of months of the season are going to be very hard having lost about 10 players over the summer. With so many new and young players it will take time to gel. We’re looking to improve and we hope to get our first points on the board against Sheffield.”

The visitors flirted with relegation last year, but captain Ollie Barron believes Spartans will be better this time around: “Everyone is looking forward to Sunday’s game after a successful pre-season. Our new Head Coach Martin White has put new systems in place and we’re looking to surprise some teams this year. With a few additions to the squad we’re definitely looking stronger than last season.” Solway and Manchester Minotaurs clash in the remaining fixture in Dumfries on Saturday.

In NIHL2 (Laidler Conference) Solihull Barons face a pair of tricky derby games with trips to Coventry Blaze and Nottingham Lions. Barons have added ex-Telford Tigers captain Tomas Janak to their roster and forward Connor Hubbuck thinks they’re a team to be feared: “Last week was a good start winning in front of our fans against Blackburn. I know my old club Coventry are a quick breaking team, but we’re confident we can beat them and the Lions. These are the games we need to win if we want to win the league and that’s our target this year.”

Deeside Dragons are aiming for a third successive victory as they meet Hull Jets on Sunday. Forward Chris Jones is pleased with the start they’ve made: “We were short-benched on Saturday at Hull and lost a couple of players to injury in the first period, but the lads really put in a shift and got the job done. Widnes was a tough game, as they’re a new team and we didn’t know what to expect. I think they’ll cause some upsets this season.”

Sheffield Senators were the surprise package last year, but lost their opening game of the new campaign at Coventry. Senators have signed ex-Lions defender Luke Perrin as Coach Andy Ellis continues to rebuild his squad.

Ellis believes a mid-table finish is a realistic target: “We’ve lost our top points scorer to the Spartans and have brought in five players from our junior system. This year is all about development and building a solid foundation for future seasons.

“The league is ultra competitive and we’ll be working hard to ensure we compete week-in week-out. Hull are always a tough team to play, especially in their barn and they have a good crop of quality junior players. I’m looking forward to another great game of NIHL hockey.”