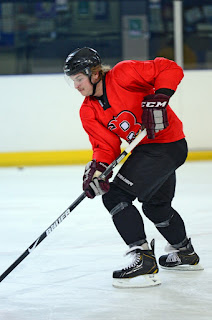 The top two in NIHL1 North face a weekend on the road as the race for the title hots up. Leaders Solway Sharks are at Coventry Blaze on Saturday, before a trip across the Midlands the following day to face Telford Titans. Sharks currently lead the way by two points from Billingham Stars, but do have two games in hand on their rivals.

Stars are in action on Sunday as they travel to meet Blackburn Hawks. The two teams met in Billingham last weekend, with Stars running out 6-3 winners and Coach Simon Leach believes they can repeat the feat.

“Blackburn on their home ice is a big job, but I think we’ve turned the corner and I’m confident we can get a result at their place,” said Leach. “Every game now to the end is going to be a battle and the lads know how important the remaining games are.” Stars’ Australian import Dave Manning (left) will ice, but Andy Finn and Andy Thornton both miss the game.

In NIHL2 North just two points separates the top four teams and they’re all in action in this weekend. Deeside Dragons knocked Nottingham Lions off the top of the table last week and return home Sunday to face Blackburn Eagles. Dragons’ Player/Coach Steve Fellows thinks the Lions result could have a huge bearing on who wins automatic promotion. “Lions are overdue a dip and perhaps finally losing at home will affect them,” said Fellows. “We still have to do our job and win our games, but this result has buoyed the team in a different way to previous wins and I think we could keep hold of top spot.”

Lions are at Hull Stingrays on Sunday, while Sheffield Senators are at Fylde Flyers on Saturday ahead of Sunday’s clash against fellow promotion hopefuls Solihull Barons at Ice Sheffield.