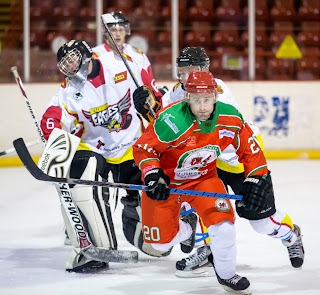 Billingham Stars face a crucial weekend in their bid to retain their NIHL1 North crown. On Saturday they travel to Telford Titans, before facing current leaders Solway Sharks at home on Sunday.

Stars’ new signing Karl Culley bagged his first goal last weekend and is hopeful his new team can stay in the title race, “I’m enjoying it at Billingham although it’ll take me a while to get back up to speed,” said Culley. “Hopefully with everyone available we can put a good run together and who knows where it will take us. It’d be nice to win a trophy for the fans who’ve been great with me since I arrived.”

Sharks take on Sutton Sting on Saturday and will be keen to add to their KD Flavell Trophy win last week. Top scorer Adam Reynolds was delighted to secure the season’s first silverware, “The first two periods were solid, but we were slightly disappointed we switched off and let Stars come back at us,” said Reynolds. “It’s another big weekend with Sutton and the Stars again, but we’re very confident we can tighten our hold at the top.”

Sutton return to home ice on Sunday as they face Telford. Sting currently sit third in the table and forward Chris Sykes believes they’re capable of improving their play-off hopes, “Solway are a well drilled team but if we knuckle down and finish our chances I think we can pinch the points,” said Sykes. “Telford are tricky to play against and it’s going to be a tough weekend, but hopefully we can grab two wins. Ideally we’d like to push on and catch Billingham for second place.”

Whitley Warriors will have new signing Anthony Price in their line-up after he completed his move from Billingham. Warriors travel to Trafford Metros on Saturday, before hosting Blackburn Hawks the following evening. Hawks are also in action on Saturday to home to Coventry Blaze.

Sheffield Spartans face Coventry on Sunday with both teams looking to boost their survival chances. Spartans expect to be at full strength for the clash and forward Ollie Barron is confident they can keep their recent run of form going, “We’ve beaten Blackburn, Coventry, Trafford and Telford in the past few weeks and only narrowly lost to Sutton,” said Barron. “Since Chris Wilcox’s departure, Andre Payette (Steeldogs’ coach) has taken over coaching the training sessions and has put some systems in place which have had a positive effect on the team.”

Deeside Dragons could move up to second in NIHL2 North on Sunday with victory at home to Hull Stingrays. Dragons have lost just once in their last seven games and forward Brian Worrall (above) is keen to keep their promotion bid on track, “We’ve really gelled as a team recently and it showed in the games against Solihull and Blackburn,” said Worrall. “We were frustrated against Nottingham where we completely dominated the game, but needed to be more clinical in front of goal and we don’t want a repeat this weekend. Our aim has to be promotion and we need to play every game as if it’s our last.”

Fylde Flyers have boosted their ranks with the addition of two new defensemen. Jason Pirie has made the switch from Trafford, while Ryan Johnston joins from Blackpool Seagulls rec team. Both will make their debuts on Saturday at home to Blackburn Eagles, while the following day Flyers travel to meet Solihull Barons.