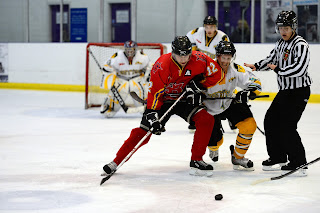 Stars’ Coach Simon Leach admitted his side are facing a crucial couple of games, “This is probably our toughest weekend of the season and these games will be pivotal in deciding where the title goes,” said Leach. “We know it’s going to be tough, but we’ve already won at Solway and also beaten Sutton in Billingham twice already this season, so we know if we play to our strengths we can get the results we need.” Leach will be back behind the bench this week, with Adam Robinson (above), Scott Ward and Martyn Davies all returning to the squad.

NIHL2 North leaders Nottingham Lions are back in action on Saturday with a trip to Sheffield Senators. Lions will have veteran forward Stuart Parker in their line-up for the first time as they look to complete a clean-sweep over their promotion rivals. Senators face another tough test on Sunday with a trip to Solihull Barons, while Deeside Dragons host Fylde Flyers. Saturday’s other fixture is Fylde at home to Hull Stingrays.