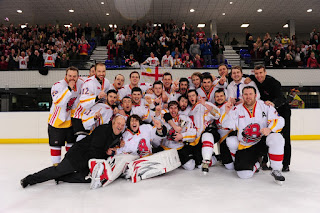 Billingham Stars aim to end 2012 with a bang as they face Trafford Metros this weekend. The reigning champions trail NIHL1 North leaders Solway Sharks by three points and Coach Simon Leach is keen to keep the pressure on their title rivals.

“After our last defeat we set ourselves a target of winning every game before Christmas,” said Leach. “A win on Sunday would see us hit that target, but more importantly we’d end the year one point behind Solway. Everyone is up for Sunday’s game against Trafford and there’ll be no changes to last week’s squad.”

Sheffield Senators will hope to get their NIHL2 North promotion bid back on track as they welcome Fylde Flyers on Sunday. Senators lost last weekend to leaders Nottingham Lions, but would move back up to second with a win against the Flyers. Deeside Dragons could close the gap on the leading pack with a win at Blackburn Eagles on Saturday.