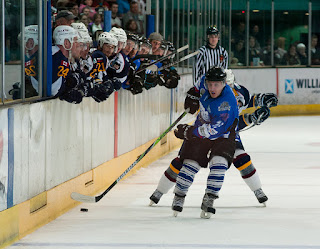 Sutton Sting will look to boost their NIHL1 North play-off hopes on Sunday with a win at home to Telford Titans. Ex-Elite League forward Chris Sykes (left) makes his debut and Sting boss Ian Johnson is delighted to have him on board, “Nearly everyone is available now and having Chris come in means we’ll only get stronger,” said Johnson. “However, we have had some bad news this week, as Tom Jeffrey could be out for the rest of the season with a serious knee injury.” Johnson also confirmed netminder Alex Birch has been released following the signing of Dmitri Zimozdra.

Solway Sharks face Deeside Dragons on Saturday in the Trans-Pennine East West Trophy, before travelling to meet Trafford Metros in the league on Sunday. Sharks have won their last 12 games and forward Nathan Salem wants to keep the run going, “Going to Trafford will be a tough game, but we want to stay top going into the New Year,” said Salem. “We played them the first game of the season and they came short benched, but it was a close game so we’ll need to be at our best.”

Billingham Stars’ title hopes have been dealt a blow with forward Stephen Wallace expected to miss at least the next two games. Wallace aggravated an earlier injury during the 5-1 defeat of Whitley Warriors last weekend and is undergoing physio with a view to returning in the New Year. Stars host Sheffield Spartans on Sunday and will have Jamie Pattison, Richie Thornton and Dave Thomas back on their blue line. The weekends’ other games sees Blackburn Hawks host Trafford on Saturday, before travelling the following day to meet Whitley.

The top two meet in NIHL2 North on Sunday as Nottingham Lions face-off against Sheffield Senators. Lions have won both meetings so far this season, but Senators Coach Andy Ellis believes they can grab the points, “I’m hoping for a return to form after a couple of disappointing performances recently,” said Ellis. “With the Lions beating Solihull last weekend, we’ve got a great opportunity to close the gap on the league leaders and solidify our position in the top two.”

Deeside face Fylde Flyers on Sunday hoping to keep their promotion hopes alive. Dragons won 11-4 at Fylde earlier in the season, but have been inconsistent in recent weeks and need a win to stay in touch with the top three. Fellow promotion chasers Solihull Barons are also in action as they meet Hull Stingrays.