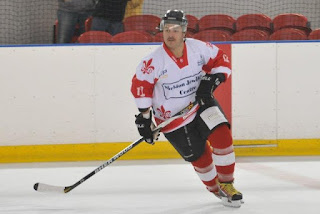 Barons’ defenseman Adam Andrews (left) believes the game is the biggest of the season so far, “If we win on Sunday we’ll draw level on points with Nottingham and those points could be crucial come the end of the season,” said Andrews. “We’ve clicked over the past few weeks and we’re playing some of the best hockey I’ve seen in my three years at Solihull. This game will be a fiery affair which neither team will want to lose.”

Lions’ forward Joe Wightman has been in fine form this year with 16 goals and is looking forward to facing the Barons, “It’s the first time we’ve met this season and playing on their pad is the biggest challenge we’ve had,” said Wightman. “Our team’s strong enough to take the points, but on a small rink with a hostile crowd it will be tough.”

The bottom four in NIHL1 North are all in action against each other on Saturday, with Coventry Blaze facing Sheffield Spartans while Telford Titans host Trafford Metros. Blaze and Spartans met two weeks ago with the Sheffield outfit winning 9-2, but forward Nick Whyatt believes Saturday will be much tougher, “Coventry have had some big results on home ice and they’ll be looking for revenge after our last meeting,” said Whyatt. “It’s a massive game for both teams, but we want to start putting a good run of results together and move up the table.”

Sutton Sting have followed up their signing of ex-Sheffield Steeldogs netminder Dmitri Zimozdra, with capture of Chris Sykes from the Elite League’s Hull Stingrays. Sting boss Ian Johnson was delighted to secure the pair, “An in-form Dmitri is just what any team needs and he can play at any level,” said Johnson. “He brings additional experience and is definitely a big game player. Chris is someone who played for me with Sheffield Scimitars and he’ll bring more quality to us as we look to secure a play-off spot. We’ve now got four solid lines and plenty of depth, so there are no excuses looking ahead. We don’t have an import like some other sides in the division, but we have the quality to match anyone now.”