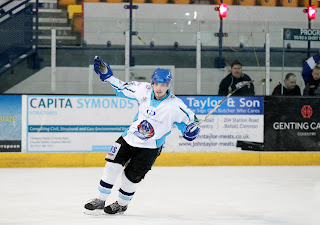 Coventry Blaze face Blackburn Hawks in NIHL1 North on Saturday, as they continue their fight to move away from the relegation zone.

Since the return of Josh Bruce (left) & Rikki Bryniarski to the Sky Dome, Blaze have seen off Trafford Metros & Telford Titans and will be hopeful of making it three in a row on home ice this weekend. The only other fixture in Division One sees Trafford and Telford do battle in Altrincham.

Just two points cover the top four in NIHL2 North and three of those teams are in action over the weekend. On Saturday second placed Sheffield Senators travel to meet Blackburn Eagles, while third placed Solihull Barons face a tricky trip to Hull Stingrays. Leaders Nottingham Lions are in action the following evening as they look to bounce back from last week’s defeat at Hull with victory at home to Fylde Flyers.