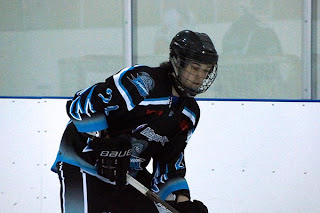 Solway Sharks host Telford Titans on Saturday bidding to extend their lead at the top of NIHL1 North to three points over Billingham Stars. Sharks are on a nine game winning streak in the league, but Titans will travel to Dumfries full of confidence after last week’s win at Blackburn Hawks. Solway have also been boosted by the call up of defenseman Declan Balmer (left) to the GB U20 squad.

Whitley Warriors face a trip to Blackburn Hawks on Saturday looking to bounce back from last weekend’s defeat at home to Sutton, while Sting will hope to strengthen their play-off hopes when they entertain the Hawks the following day. The only other game in Division One sees Sheffield Spartans face-off against Coventry Blaze.

Billingham take a break from league action with a double-header weekend in the Trans-Pennine East/West Trophy. They host Sutton on Saturday before welcoming Whitley to the TFM Ice Arena the following night. Solway are also in Trophy action on Sunday as they travel to meet Deeside Dragons.

NIHL2 North leaders Nottingham Lions travel to Hull Stingrays on Saturday hoping to extend their unbeaten run to nine games. Lions’ forward Gareth O’Flaherty believes they can maintain their good form, “We’ve had a great start to the season and the lads are enjoying themselves, though it hasn’t been easy,” said O’Flaherty. “We’ve got four strong lines who are all capable of holding their own. There were a few doubts about us at the beginning of the year, but I think we’ve proved we’re here to win and we’ll be looking to do that in Hull this weekend.”