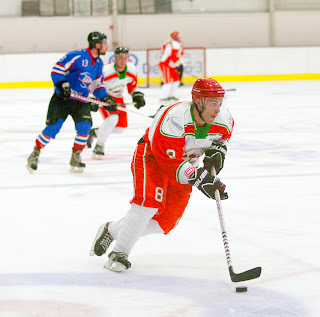 Blackburn Hawks could have Aaron Davies back in their line-up this weekend, after the completion of his transfer back from Deeside Dragons. The move adds extra spice to this Sunday’s clash at Blackburn Arena, with the two teams set to meet in the Trans-Pennine East/West Trophy. Dragons’ boss Ian Foster believes his team have every chance of getting a good result, “We’ve an opportunity on Sunday to show how much we’ve come on this season by putting in a good performance,” said Foster, “It’ll be a tough game but one we’ll be up for.”

Billingham Stars are aiming to close the gap on NIHL1 North leaders Solway Sharks to a single point this weekend. On Saturday they travel to face Sheffield Spartans, before returning home to meet Trafford Metros the following evening. Spartans complete their weekend with a tough trip to Whitley Warriors. Telford Titans finally get their season underway against Sutton Sting on Saturday – ex-Solihull netminder Sam Hewitt makes his Titans debut, while Sting ice former Hull Stingrays forward Aaron Jordan for the first time.

Sheffield Senators face a tough double header weekend as the bid to maintain their unbeaten start to the NIHL2 North season. On Saturday they face Solihull Barons and follow up with a trip to leaders Nottingham Lions on Sunday. Senators’ Coach Andy Ellis acknowledged his team faced a tough challenge, “Solihull and Nottingham are the top two teams in the league so far this season, and it’ll be a good for us to see how we compete with teams who were in NIHL1 last term,” said Ellis. “We had a great opening result away at Deeside and followed up with a solid win last weekend. The league is wide open at the moment, with any team capable of beating each other.”