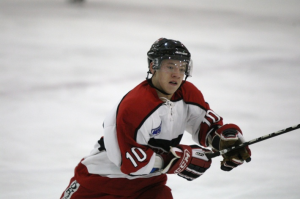 The big game this weekend in NIHL1 North sees Billingham Stars host Whitley Warriors on Sunday. Warriors hope to bounce back from last week’s home defeat to Solway Sharks, while Stars look to get back to winning ways after dropping their first point of the season at Sutton Sting.

Stars’ Coach Simon Leach expects a tough game against their local rivals, “Our games don’t get any easier, with Whitley coming to town,” said Leach. “It’s a local derby so we’ll need to re-focus and remember how hard we have to work for each other and show the commitment we showed against Solway and Coventry. I know the boys are disappointed with themselves after the Sutton game, but we can put that right this weekend.”

Blackburn Hawks meet Sutton on Saturday, looking to put their indifferent early season form behind them. Latvian import Ivo Dimitrijevs (above) makes his home debut and thinks performances will improve, “It was really exciting to start my new season with my new team, but my debut wasn’t that good,” said Dimitrijevs. “It’ll take time to get accustomed to a new style of hockey, but the season’s only just started and we will get better. It’s my first home game and I’ll do everything to win. I also want to thank the fans – it was nice to see the Latvian flag at Trafford.” Ex-Hawks junior forward Shannon Lingwood has signed for Sting and could make his debut against his former club. The only other fixture in NIHL1 sees Coventry Blaze face-off against leaders Solway Sharks.

Deeside Dragons are on a recovery mission after suffering their third NIHL2 North loss of the season at Solihull Barons. Dragons face Blackburn Eagles and team boss Ian Foster admits they need to quickly get back on track, “I think it’s taken a few weeks and losses for the guys to realise this is going to be a tough division to get out of,” said Foster. “We’ve trained really hard this week and will be looking to get back to winning ways this weekend.” Dragons expect to have Tom King back in their line-up.

Fylde Flyers travel to Hull Stingrays on Sunday, hoping to build on last week’s 4-3 win over the same opposition. Flyers Coach Mick Caunce confirmed import Elvis Veldze looks unlikely to return to the club due to work commitments, but is still hoping to strengthen his squad, “I’m pleased with the progress we’ve made and most of the players have improved their fitness over the last month or so,” said Caunce. “Hull gave us a good game last week, but I’m hoping our improved fitness will pay off on their bigger ice. We’ve a full squad travelling and a coach full of supporters which I know the lads appreciate. I know they won’t let them down.”