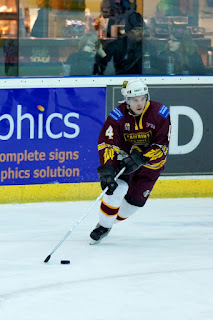 Whitley Warriors face Solway Sharks on Sunday, aiming to put a dent into their NIHL1 North title hopes. Sharks could move top of the league on Saturday as they meet Sheffield Spartans and Warriors’ forward Mark Good (left) is looking forward to the clash, “There are three teams in our league who have big budgets and we’ve already put in good performances against two of them,” said Good. “The Northern League games against Sharks were always competitive and had an extra edge as they have ex-Warriors in their line-up. I’m personally looking forward to going up against former line-mate Daniel Murdy.”

Billingham Stars put their unbeaten record on the line with a trip to Sutton Sting on Sunday. Stars were 3-2 winners in their last visit to Ice Sheffield and Coach Simon Leach is confident they can keep their run going, “Last time we took a while to adjust to the bigger ice surface, but we’ve addressed this in training,” said Leach. “Sutton will be confident following their win at Whitley and are improving all the time, but we’re doing all the right things and the players are working so hard.” Stars will be missing Dave Thomas & Paul Windridge, while Andy Thonrton is doubtful.

Trafford Metros will look to end a losing streak of six at home to Blackburn Hawks on Saturday. Metros hope to have Jake Nurse back after his short spell with Manchester Phoenix, while Hawks’ new Latvian import Ivo Dimitrijevs could make his debut. Coventry Blaze are still looking for their first win of the season and welcome Sutton to the Sky Dome on Saturday.

After last week’s NIHL2 North loss at Nottingham Lions, Deeside Dragons face another difficult road trip on Sunday to meet Solihull Barons. Shaun Kippin is hopeful the Dragons will bounce back, “The Lions were a really tough team but we showed a lot of character to make a game of it from 5-0 down,” said Kippin. “This team’s already shown what it’s capable of and we have a lot of talent on the ice, we just need to find a way to deliver consistently good performances if we want to take a promotion spot. I still think it’s between us, the Lions and Solihull to go up, but we need to get results now if we want to get to North One.”

Division Two’s only other fixture is on Saturday, with Fylde Flyers facing-off against Hull Stingrays.