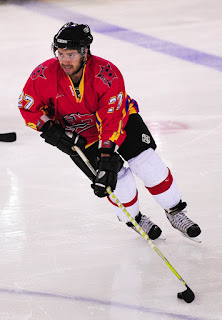 Billingham Stars will look to maintain their 100% start to the NIHL1 North season, as they face a weekend double header against Sutton Sting. Stars travel south on Saturday to meet Sting in the Trans Pennine East/West Trophy, before Sunday’s league clash at the TFM Ice Arena.

Andy Thornton (left) & Scott Ward are likely to miss both games, while Sting include two new signings – ex-Bradford Bulldogs Player/Coach Andy Brown and former Sheffield Scimitars forward Neil Hardy. Sting Coach Ian Johnson was delighted to secure the pair saying, “Andy is strong on and off the puck and brings a wealth of experience to our roster. Neil’s been away from the sport for almost seven years, but trained with us through the summer. He’s got an eye for goal and is still in tip-top condition.”

Whitley Warriors meet Trafford Metros at Hillheads on Sunday. Forward Dean Holland is hopeful they’ll bounce back after their cup defeat to Billingham last weekend, “I think we’ve made a good start to the season, taking three points from four in the league,” said Holland. “Trafford are a strong side and will come out flying, so we’ll need to match their intensity and take the game to them.” Warriors hope to have ex-Newcastle Vipers defender Paul Shanks registered in time to play.

Sheffield Spartans face a tricky weekend as they travel to Altrincham on Saturday to face Trafford and welcome Solway Sharks to Ice Sheffield the following evening. Spartans have lost their last two games and Player/Coach Chris Wilcox is looking for improvement from his players, “After a fairly good start in Blackburn, we were happy with how our team was put together,” said Wilcox. “Unfortunately we’ve had a difficult couple of weeks, but I’m confident the team will turn the corner soon starting at Trafford.” Sharks meet Coventry Blaze the previous evening at Dumfries Ice Bowl.

The only league game in NIHL2 North sees unbeaten Nottingham Lions travel to face Blackburn Eagles on Saturday. Deeside Dragons are in action on Sunday as they host Division One outfit Telford Titans. The visitors are yet to begin their league season, as they await completion of a rink refurbishment. Titans’ roster this year includes netminder Ben Hunt, who’s returned from Telford Tigers, while Karol Jets, Chris Jones, Mike Jones and Ashley & Ryan Stanton are all back for another season.