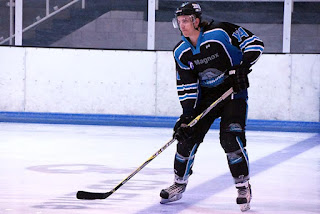 Solway Sharks get their NIHL1 North season under way this weekend, hoping to prove they have what it takes to mount a serious challenge for honours. On Saturday they host Trafford Metros in the league, before travelling the following evening to face Blackburn Hawks in the Trans Pennine East/West Trophy.

The Dumfries outfit won last season’s Division Two title without dropping a point and they’ve added ex-Elite League defensemen John Connolly & Craig Mitchell to an impressive looking roster. Forward Adam Reynolds (above) believes Sharks are set for another successful year, “We’re looking forward to the league campaign starting and couldn’t have had a better pre-season,” said Reynolds. “We had two great results against the EPL’s Peterborough Phantoms and I really think all three trophies are a must for us this season.”

Whitley Warriors face a tricky weekend, with a league trip on Saturday to meet Sheffield Spartans followed by Sunday’s derby clash at Hillheads against Billingham Stars in the cup. Newly promoted Sutton Sting start their league campaign at home to Coventry Blaze.