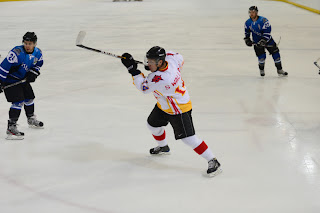 Billingham Stars begin the defence of their NIHL1 North title on Saturday with a home game against Sheffield Spartans. Former EPL pair Stephen Wallace (left) & Michael Bowman are expected to make their debuts.

Coach Simon Leach is confident Stars will challenge for hounours once again, “We’ve retained all but two of last season’s winning team and added some real quality in the close season,” said Leach. “Our priority as a team is winning. Billingham are the current champions, so we’ll see teams putting that little bit extra in because naturally they want to beat the top team.”

Solihull Barons face a stern test of their NIHL2 promotion credentials with a trip to Deeside on Sunday. Dragons started their season with a pair of wins but experienced defenseman Adam Andrews is confident Barons will mount a serious challenge following their relegation last year. “This season it’s nothing less than promotion back to NIHL1. We had a hard learning curve last year, but one which was very valuable to us as we now know what it will take to remain there,” said Andrews. “A lot of work has been put in during the summer in relation to finances and extra ice time for the players. With the additional off-ice conditioning we’ve been doing, we’ll probably be one of the fittest teams in the NIHL.”

Andrews will be partnered on the blueline this term by former Florida Panthers defenseman Chris Allen, while Barons have retained most of last season’s squad. With two more high profile signings expected in the coming weeks, Andrews believes Barons can bounce straight back. “There are only two real title contenders this season – ourselves and Deeside. I’m looking forward to facing them on Sunday and this will certainly set the tempo in a game neither team will want to lose. I’ve been having banter with Deeside’s Shaun Kippin on Twitter this week and I’m looking forward to him coughing up on his personal wager with me.