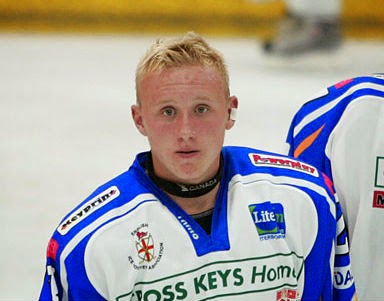 Sutton Sting have confirmed their third signing of the summer, with Thomas Jeffrey agreeing to return to the NIHL North Moralee D1 club.

Jeffrey was a key part of Sting’s 2011/12 ENL promotion winning squad, before taking a break from the sport to concentrate on his business interests.

Sting Coach Matt Darlow commented: “I originally coached Tomo as a kid in the England set-up and have seen him grow and mature into a great D-man.

“As soon as it was clear I was joining Sutton it was inevitable he would rejoin us. Tomo brings a lot of toughness, but he’s also an excellent player with great hands and vision, defensive skills and cannon of a shot. His skills with his gloves on have been undervalued at previous clubs and it’s these qualities I’ve brought him in for.”

Jeffrey previously played over 100 EPL games with Peterborough Phantoms and Sheffield Steeldogs, in addition to representing Great Britain at U18 level. He said he’s delighted to get back on the ice: “Sutton have a great team and a great set-up. I needed some time away from the sport to concentrate on business, but it made me realise how much I enjoy playing.

“I stayed fit by boxing so physically I’m very strong. As well as helping develop new talent, this coming season we’re determined to be bigger, better and more powerful than ever.”

In Laidler D2, Solihull Barons trio Ryan Selwood, Andy Whitehouse and Richard Crowe are all back for another season. Simon Furnival and Mike Jones have agreed a further year with Deeside Dragons, while Aled Roberts joins them in North Wales from Widnes Wild.

Sheffield Senators’ Head Coach Andy Ellis has confirmed Bob Browne and Mark Hartley will compete for netminding duties next term. The duo shared the role last season and Ellis says he’s delighted to have them back between the pipes: “Bob and Harts are the strongest tandem in the league – they’d be starters for any other team in NIHLN Laidler D2.

“They both compete every night and their respective styles give me flexibility, allowing me to match goaltenders to specific opposition and the rink we’re playing in. Both guys fill me with confidence and are real team players. They compete hard and push each other to perform, which makes my job a whole lot easier.”