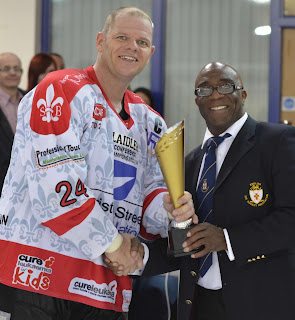 Solihull Barons have appointed Perry Doyle (left) as their new Director of Hockey Operations ahead of the upcoming NIHL1 North season.

The popular defenseman takes over at the helm following Darren Bellerby’s decision to step down as Head Coach due to work commitments.

GB U18 netminder Denis Bell has signed for a second year with Telford Tigers NIHL.

Brad Betteridge, Joe Aston and Josh Hustwick are amongst seven other players to agree a further season with the Tigers.

Craig Mitchell and Joe Coulter are back for another year with Solway Sharks, whilst netminder Mark Watson has agreed a fifth season in Billingham Stars’ colours.

In D2N, Deeside Dragons have snapped up Filip Supa from Widnes Wild. Marc Lovell, James Parsons and Matt Compton all return for another campaign in North Wales.

Bobby Caunce has left Widnes to join Blackburn Eagles, whilst Jordan Ashington and Aaron Jordan have agreed another season the Lancashire club. Wild have boosted their ranks with the addition of Sheldon Cassidy.

Oxford City Stars have announced their two imports for the coming season, with Andrew Magee making the switch from Solent and Andrew Bates joining from Worcester State University, USA.

Defensemen Tom Avery, James Clarke, Sam Arnold and Jake Florey have all agreed a return to the Stars’ roster, but Mason Wild has left the club to join Solent. Cam Barker, Ilya Antinov and Harvey Hind-Pitcher return for another year with Bracknell Hornets.

D2S title hopefuls Slough Jets have signed Richard Smith from Invicta Mustangs, whilst James Sanderson has agreed a third season at the Hangar.