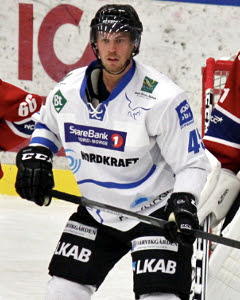 Sutton Sting have announced a new coaching team ahead of the upcoming NIHL1 North season.

John Ross has been appointed as the club’s new Player/Coach and he will be assisted by ex-Sheffield Scimitars forward Dean Smith.

“The league is constantly getting better and we needed to make a few changes in the quest for improvement.

“John signed last year and did as well as expected after such a long time away from the game. One thing that stood out was his leadership skills and the respect he received from the lads.

“Dean has some major high level senior experience both as a player and a coach, and after supporting the senior team behind the scenes last term he jumped at the chance to be involved this season.”

Johnson also confirmed that forward Slav Movko has agreed another season with the club. The Latvian missed a number of games last year due to work commitments and travel issues, but Sting have secured a new sponsor for Movko which will see him live and work in Sheffield.

“This is great news for the club,” said Flavell. “Dennis is a big physical forward with plenty of hockey experience behind him – he’s looking to show the fans at Billingham what he can do.

“After a long stint in his home town of Umeå, Dennis decided to go to Norway for one year. Now he’s keen to move on and he thinks England will be a good challenge and opportunity for him. He is looking forward to coming and can’t wait for the season to start.”

Forwards Ben Richards and Callum Watson and young blueliner Liam Smedley have all been added to Whitley Warriors roster for the forthcoming season. Aaron Davies and Tom King are back for another year with Blackburn Hawks.

In NIHL2N, Blackburn Eagles have signed Chris Jones from Deeside Dragons. Netminder Phil Crosby is back for his second year with the club. Matt Wainwright returns to the Dragons after a season with Widnes Wild.

Filip Supa and Pavel Vales have agreed another year with Wild. Michal Fico has also been added to the roster. Brian Worrall, Dan Berry and Philip Proudlove all return for another year with the newly-branded Altrincham Aces. Coventry Blaze have confirmed twelve players to their roster including returnees Dale Buckland, Lui Brindle and Luke Smith.

Streatham Redskins have signed David Wride from Bracknell Hornets and James Warman from D2S outfit Bristol Pitbulls. Evander Grinnell Parke, Liam Rasmussen and David Carr all return for another year. Stewart Tait has the Redksins to join the Hornets. Joining Tait in Bracknell will be Czech Republic defenseman Tomas Fojtik who returns to the ice after a year away from the game.

Sam Roberts has joined London Raiders from D2 club Haringey Racers, while Wightlink welcome back Bobby Streetley and Ben Paynter for another season. Harrison and Connor Goode have agreed a further year with MK Thunder.

D2S title hopefuls Slough Jets have added Liam Underdown to their roster, while Bristol have agreed another year with Grant Richardson and Janne Virtanen.