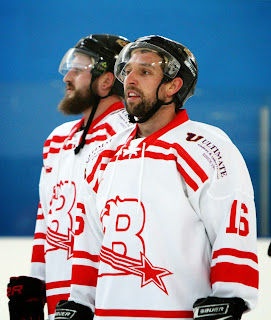 It’s been another busy couple of weeks for player signings and transfers in NIHL1 South.

Reigning play-off champions Wightlink Raiders have confirmed top import Jaroslav Cesky has agreed a second season with the club, while promising defenseman Brendan Baird moves to the island after a year in the EPL with Basingstoke Bison.

Streatham Resdkins have signed blueliner Ryan Giles from Chelmsford Chieftains, while Joe Johnston and Joe Allen return for another season.

Danny Hammond, James Ayling and Sean Barry are all back for a further year with the Cheiftains, but young forward Bailey Chittock has joined London Raiders.

Mason Webster also makes the switch to London from the EPL’s Peterborough Phantoms along with Sebastian Downing from D2S outfit Chelmsford Warriors, while netminder Michael Gray is back for another season. Jacob Ranson has left the club to sign for Invicta Dynamos.

Bracknell Hornets have confirmed a trio of returnees, with Tom Fisher, Ryan Handisides and Mark Duffy all back for another campaign. Danny Milton has also moved to the Hornets after an impressive season in D2S with Slough Jets.

Stephen Gosset, Alex Cole and Shaun Rudkin have agreed another season with Solent Devils, while Alan Green, Andy Cox, Josh Florey and Mike Whillock are back for a further year with Oxford City Stars.

NIHL1N champions Blackburn Hawks have confirmed Adam Brittle will return for his third season with the club. Billingham Stars duo Michael Bowman (above) and Richie Thornton are back for another year with the Teessiders. Dan Pye, Josh Maddock and Callum Queenan have all agreed a further season with Whitley Warriors.

In D2N, Widnes Wild have confirmed Matt Wainwright is back for his second season, while forward Chris Gee has also been added to the roster. Gee returns to the UK after spending a year in Canada playing for Da Byes in the Calgary Men’s Hockey Association League.