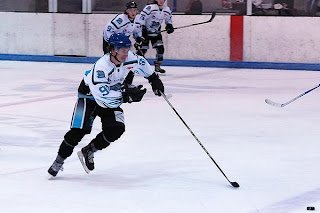 Solway Sharks forwards Stevie Moore and Ross Murray (left) have agreed another year with the Dumfries outfit. Coach Martin Grubb was pleased to secure the pair:

“I’m delighted to welcome Steven and Ross back for another season. They were both big players for us last year and although people will look at the bigger point scorers these two were definitely two of our best overall players.

“In my opinion they are the best penalty killers in the league and they shut down so many teams’ top lines whilst still coming up with key goals.”

Billingham Stars have confirmed five returnees as they bid to regain their NIHL crown from the Sharks. Richie Thornton and Michael Bowman have been made temporary coaches while the club seek a full-time aapointment. They are joined on the roster by Paul Windridge, Scott Ward and Ben Davison. Trafford Metros forward Ben Brown has agreed a fourth season with the club, while ex-U18s captain Mason Howard steps up to senior level for the first time.

As first rumoured by C2C, defenseman Adam Andrews has left Solihull Barons to join Coventry Blaze. Andrews believes his experience will be invaluable: “I want to help as much as I can to make Blaze a successful team this season. I wear my heart on my sleeve, I’ve played in all the leagues, so I’m hoping to bring a lot of experience and a mature head to show the younger guys how it’s done.” Antti Kohvakka, Dale Buckland and Danny Barker have also agreed another year at the SkyDome.

Another recent C2C rumour has proved on the mark with Chris Allen leaving the Barons to join Nottingham Lions. Widnes Wild have added Kurtis Hall and Craig Williams to their roster.

Blackburn Eagles new Coach Scott Barnett has confirmed his first two signings of the summer. Defenseman Craig Lutkevich returns for his second season, while forward James Riddoch steps up from the U18s.

A miserable 2012/13 season saw Eagles finish pointless, but Barnett believes things will improve this time around: “I’m really looking forward to coaching the Eagles this year. It feels good coaching at a club I’ve spent many years playing for. After a difficult season changes are being made to benefit the players. We are working closely with the Hawks to develop players further after the great success they had last year.”