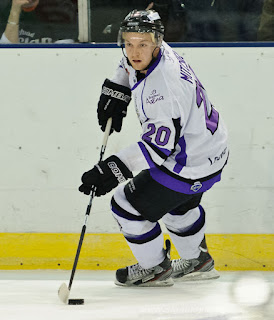 Solway Sharks are aiming to pull off another major coup after targeting a pair of Elite League players. Coast to Coast understands the Dumfries outfit have held talks with Lee & Craig Mitchell and are hopeful of securing their services for the upcoming NIHL1 North season.

Forward Lee (left) finished last year with Braehead Clan, but it’s believed he’s unable to commit to another top flight campaign due to work commitments, while Dundee Stars’ defenseman Craig missed the whole of last season with a shoulder injury.

Fife junior forwards Josh Leslie & Robyn Floyd could be on their way to Blackburn Hawks. Sources close to the Scottish club claim the teenage pair may sign two-way deals to gain more experience, with a view to progressing onto the Flyers’ senior ranks. Hawks have confirmed they’ll face the EPL’s Telford Tigers in a pre-season challenge match on Saturday 25th August at Blackburn Arena (face-off 5.45pm).

NIHL1 South champions Romford Raiders’ plans for the new season have been dealt a double blow. Forward JJ Pitchley has agreed a deal to play for Dallas Snipers in the WSHL, while captain Anthony Leone has announced he won’t be returning. Invicta Dynamos’ experienced utility man Grant Baxter has confirmed another year with the Kent club who’ve also snapped up promising young forward Joe Bliss.