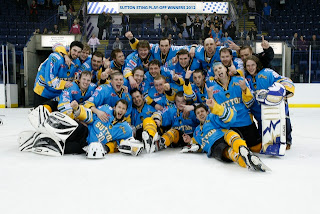 Newly promoted Sutton Sting have made their first player announcements with Richie Oliver, Ben Lowe, Simon Butterworth & James Goodman all agreeing another season. Coach Ian Johnson’s had a busy summer and confirmed to Coast to Coast he’s added four new players to his roster, with offers made to another three. Sting booked their place in NIHL1 North after winning a promotion play-off against Nottingham Lions and Johnson is keen to ensure Sting push on, “Of the players I’ve added so far, one is from the EPL and another is a young Elite League prospect who I’m hoping will get on the ice with Sheffield Steelers during August,” said Johnson. “We learnt a lot from our encounters with Solway last year and I’m confident we’ll be competitive every week. I fully expect us to be challenging for a play-off spot at least.”
Sheffield Spartans have confirmed the signings of brothers Ross and Dougie Jordan. Both are products of the Sheffield Hockey Academy, progressing through the junior ranks into senior hockey, before Ross moved away to study in Glasgow. Dougie returns for a fourth season while Ross has made the switch from the SNL’s Paisley Pirates. Last years losing play-off semi-finalists Telford Titans have made their first signing of the summer, with Owen Bennett agreeing a sixth season with the club. Billingham Stars’ Coach Simon Leach is understood to be considering further strengthening his squad with the addition of an import.
Fylde Flyers’ boss Mick Caunce is putting the finishing touches to his roster as the Cleveleys based outfit enter their second season. Flyers are hoping to improve on last season’s sixth placed finish in Division Two and have already secured 18 players for the new campaign. Caunce is looking to increase his squad to 24, but refused to comment on speculation the club were interested in signing Sam Dunford from Blackburn. Fylde were also hoping to play either the Hawks or Titans in pre-season friendlies, but with neither team able to ice a sufficient number of players Caunce is on the look-out for replacement fixtures, “We’ve got two Saturdays available in August at Cleveleys – 11th & 18th – with no cost to the visitors,” said Caunce. “It’s a good team trip before the season starts, with the possibility of a night out in Blackpool after the game.”