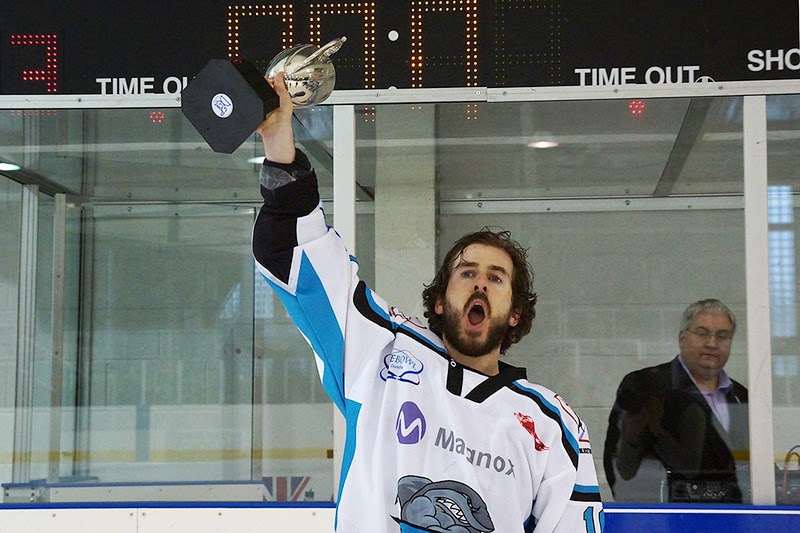 The close season player merry-go-round is underway in the NIHL, with a number of announcements already confirmed.

In the North, Whitley Warriors have been busiest so far, re-signing eleven of last season’s squad including Adam Reynolds, DJ Good and Dan Harris. Forward Dean Holland has also returned to Hillheads after a spell in the EPL with Guildford Flames.

Treble-winning Solway Sharks have seen captain Mark Gallagher (above) retire, while Blackburn Hawks’ defender Scott Robson has agreed a two-way deal with the EPL’s Peterborough Phantoms and Hull Stingrays in the Elite League.

Sheffield Spartans netminder Brad Day has moved to the EPL with Sheffield Steeldogs, where he’ll be joined by Sheffield Senators forward Cameron Brownley. Widnes Wild’s Ben Brown has agreed a second season with the club.

Coast to Coast understands Czech pair Jakub Hájek and Pavel Valeš could be on their way to NIHL North, while one of last year’s top ten points scorers may be heading to NIHL1 South outfit Streatham Redskins.

NIHL1S runners-up Wightlink Raiders have confirmed Player/Coach Jeremy Cornish is back for his sixth season with the club. Raiders have also signed defenseman Carl Graham from the EPL’s Basingstoke Bison and Solent & Gosport Devils netminder Christian Cole, while Simon Hobbis and Alex Barker have agreed another year.