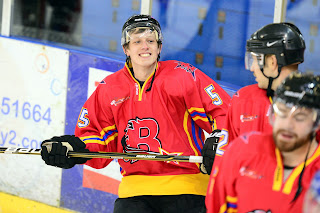 Billingham Stars kept their NIHL1 North title hopes alive with a four-point weekend. A James Moss (left) hat-trick helped them to a 5-2 win at Coventry Blaze and they followed up with a 6-3 win at home to Blackburn Hawks – Cal Davies scored twice for Stars. Chris Sykes scored three as Sutton won 7-2 at Telford Titans and Sykes repeated the feat in Sting’s 5-4 home win over Whitley Warriors.

Deeside Dragons are the new leaders of NIHL2 North after a 5-3 win at Nottingham Lions – Brian Worrall (2) & Jordan Bannon (2) led their scoring. Sheffield Senators beat Blackburn Eagles 6-1, while Mike Rodger’s hat-trick helped Solihull Barons to a 15-4 win at Fylde. The Flyers completed a miserable weekend with a 12-3 defeat at Hull Stingrays.

Wightlink still lead NIHL1 South after an 8-1 win over Solent & Gosport Devils, but the Raiders missed the chance to extend their lead with a 3-3 draw at home to Cardiff Devils. Chelmsford Chieftains stay second after a 12-1 win at Solent – James Ayling grabbed a hat-trick. Romford Raiders are still in the title mix after their 9-0 win at home to MK Thunder. In the NIHL South Cup, Romford won 4-2 at Cardiff, while Invicta Dynamos beat Bracknell Hornets 8-3.

EPL leaders Basingstoke Bison had a mixed weekend – beating Telford Tigers 3-0, but falling 5-4 at Sheffield Steeldogs. Two goals each for David Longstaff & Jozef Kohut helped Guildford to a 7-4 home win over Manchester Phoenix, and Longstaff followed up with another pair in Flames’ 5-2 win at Slough Jets. Phoenix completed a nightmare road trip with a 9-4 reverse at Peterborough Phantoms, but Slough picked up a couple of points courtesy of their 8-0 win at Sheffield.

Janne Jokila scored three as MK Lightning downed Bracknell Bees 8-2, while Kamil Tvrdek’s trio helped Lightning to a 4-2 in the reverse fixture. Swindon beat Peterborough 6-2 – Henri Sandvik (2) & Jonas Hoog (2) led their scoring – but the Wildcats couldn’t follow up as they fell 6-3 at Telford.

Edinburgh Capitals boosted their Elite League play-off hopes with a pair of wins. Capitals ran out 4-1 winners at Braehead Clan, while two goals from Peter Holecko helped them to a 7-2 win over Fife Flyers back on home ice. A pair from Dominic Osman helped Hull Stingrays to a 5-1 home win over Dundee, but Stars gained revenge in the return with an 8-7 overtime success – Matt Baxter got the winner. Fife’s Jason Pitton grabbed the winner as Flyers beat Cardiff Devils 5-4 after a shoot-out. Coventry Blaze closed the gap on Cardiff in fourth place with a 2-0 win at home to Braehead.