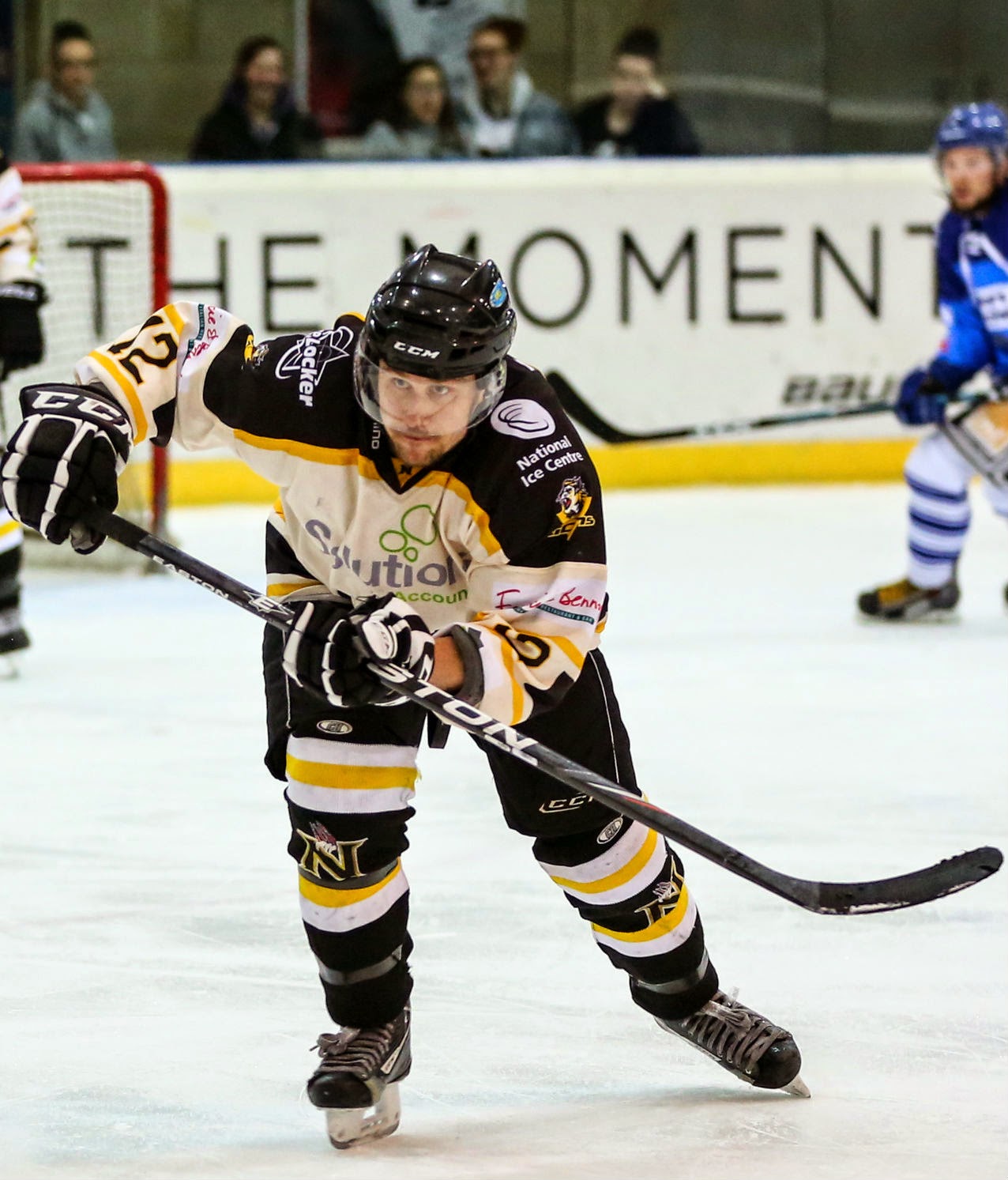 Michael Elder scored three for Billingham as they bounced back to form with a stunning 8-1 home victory against Whitley Warriors.

Sheffield Spartans led 3-1 against Whitley with one minute left, but goals by DJ Good & Jamie Tinsley snatched a point for Warriors. Solway won 3-1 at home to Sutton Sting.

Solihull Barons maintained their 100% Laidler D2 record with a 6-2 win at Sheffield Senators. James Smith scored four for Telford Tigers NIHL in their 7-4 success at Coventry Blaze and they followed up with a 6-4 victory at home to Blackburn Eagles.

Nottingham Lions are up to fourth after a 7-4 home win against Coventry – Slawomir Kasprzak (above) grabbed a hat-trick. Widnes Wild won 13-0 at home to Bradford Bulldogs, but they found things tougher at Sheffield as they crashed 5-1 against the Senators.

Chelmsford Chieftains moved two points behind NIHL1 South leaders Invicta Dynamos with a pair of wins against Solent Devils. Chieftains triumphed 3-2 on the road and followed up with a 3-0 home success.

Invicta forward Juraj Huska scored three in Dynamos’ 6-2 win at Streatham Redskins, but their long unbeaten league record came to an end as they slipped to a 5-4 defeat at home to Bracknell Hornets. Alex Barker scored twice for Wightlink Raiders in their 5-2 victory at Cardiff NIHL1.

London Raiders blew a three goal lead to draw 3-3 at Bracknell and they completed a disappointing weekend with an 8-6 reverse at Oxford City Stars. Jamie Line hit a hat-trick for MK Thunder in their 8-4 win at home to Streatham.

Telford Tigers moved eleven points clear at the top of the EPL with a 5-3 win at Manchester Phoenix. Basingstoke Bison enjoyed a four-point weekend, winning 4-3 at home to Peterborough and by the same scoreline at Guildford Flames.

Sheffield Steeldogs suffered two heavy road defeats, losing 8-2 at Manchester and 7-2 at MK Lightning, but they bounced back with a 2-1 overtime success against Lightning on home ice. Aaron Nell scored two for Swindon Wildcats in their 4-2 win at home to Manchester, but they failed to follow up as they lost 3-1 at Bracknell Bees.

Braehead Clan still lead the Elite League after a pair of wins. Two Leigh Salters goals helped them to a 5-1 success at home to Fife Flyers and Clan followed up with a 4-1 victory at Hull Stingrays.

Nottingham Panthers returned to form with an impressive 4-1 win at Sheffield Steelers and they made it a four-point weekend with a 4-3 success after overtime at home to Cardiff Devils. Steelers recovered to win 3-2 at Coventry Blaze.

Belfast Giants endured a miserable weekend, losing 4-2 at home to Hull and 3-2 after a shoot-out at Dundee Stars. Jakub Sindel’s second of the night sealed a 5-4 win for Coventry at Cardiff. Edinburgh Capitals lost 2-1 on home ice against Dundee and 9-3 at Fife.

Nottingham are through to the semi-final of the Elite Challenge Cup after completing an 11-8 aggregate success against Fife. Cardiff lead Belfast 4-3 after the first leg of their quarter-final, while Sheffield hold a 3-0 advantage over Dundee.