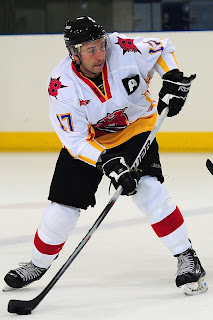 Nottingham Lions’ unbeaten NIHL2 North run continued with a 13-0 win at home to Blackburn Eagles – top scorer Ollie Betteridge was among the points again. Sheffield Senators beat Hull Stingrays 5-3, but they fell by the same score on Sunday at Solihull – Joe Henry scored three for Barons.

MK Lightning beat Slough 3-2, but the Jets won the return 2-0. Lightning made it four points for the week with a 3-2 win at Sheffield Steeldogs – Adam Carr hit the shoot-out winner. Bracknell Bees lost 6-3 at Sheffield – Derek Campbell & Steve Duncombe both scored twice – and completed a miserable week with a 5-4 loss at home to Slough. Nicky Watt scored two as Swindon beat Telford 4-2, but the Wildcats were edged out 4-3 in overtime at Peterborough – Tom Norton got the winner.

Braehead Clan suffered a mixed weekend in the Elite League, beating Edinburgh Capitals 6-1 but losing 8-4 in the reverse fixture. Mike Wirll grabbed a last minute winner for Dundee as they won 2-1 at Fife Flyers, and the Stars made it a four-point weekend with a 5-4 win at home to Edinburgh. Coventry gained revenge for a 4-2 Challenge Cup defeat at Hull Stingrays with a 2-1 league win at home, while Cardiff’s Paul Bissonette was on the scoresheet again as the Devils downed Fife 4-0.