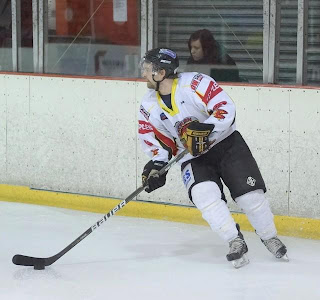 Blackburn Hawks produced a stunning second-leg performance against Solway Sharks to reach the final of the NIHL1 North play-offs.

Sharks held a 5-3 lead after the first-leg in Dumfries, but Hawks turned things around back on home ice with a 6-1 victory securing an aggregate 9-6 success – Blackburn’s Dan MacKriel (left) scored three over the tie.

Reigning play-off champions Billingham Stars hold a narrow advantage after the first-leg of their semi-final after a 2-1 win at Sutton Sting – Stephen Wallace got the winner.

Wightlink Raiders edged past Romford Raiders 7-6 on aggregate to claim their place in the NIHL1 South play-off final – Richard Facey got the shoot-out winner. Their opponents will be Chelmsford Chieftains who beat Invicta Dynamos 10-8 over two legs.

Next weekend sees Coventry Blaze and Deeside Dragons face-off over two legs for a place in NIHL1 North.