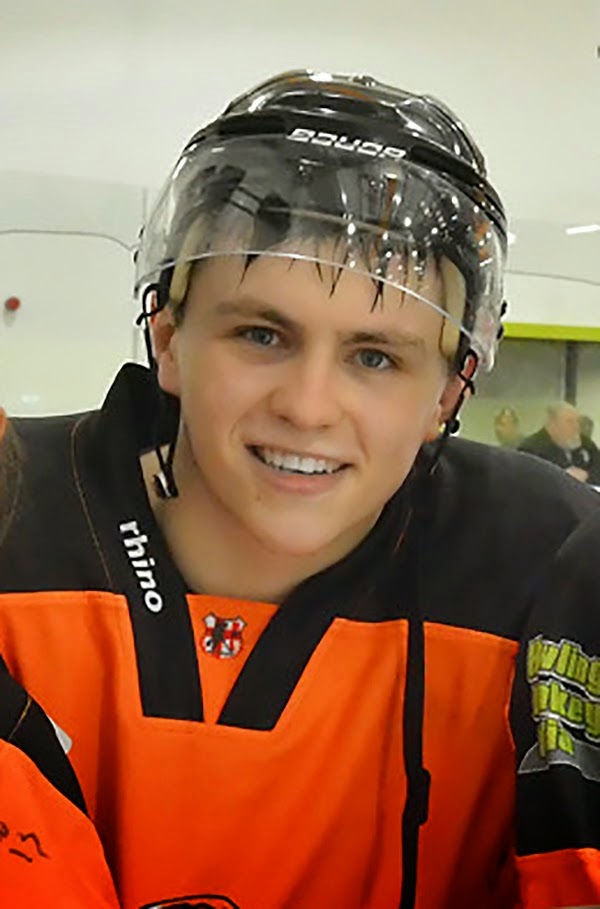 Sheffield Spartans are in pole position to reach the NIHL North Moralee D1 play-offs after a 4-4 draw at home to Blackburn Hawks.

Sutton Sting’s 7-3 defeat at Billingham Stars means Spartans need just a point when the two teams clash on the final day of the regular season to qualify for the Dumfries showdown.

Hawks completed their league campaign unbeaten as they cruised to a 12-1 success against Manchester Minotaurs.

Dean Holland scored three for Whitley in their 8-1 win at Manchester, but Warriors failed to follow up as they lost 3-2 at home to Solway Sharks.

Solihull Barons claimed the Laidler D2 title in style with a 16-4 victory at Coventry Blaze. They extended their winning run with a 7-4 success at Hull Jets.

James Smith (above) & Karol Jets both hit hat-tricks for Telford Tigers NIHL in their 8-0 home win against Hull, and the pair completed a successful personal weekend with five and four goals respectively in Tigers’ 15-1 victory at home to Bradford Bulldogs.

Deeside Dragons won 7-4 at Bradford and 8-2 on home ice against Coventry. Sheffield Senators triumphed 10-4 at Blackburn Eagles, while Nottingham Lions completed a miserable weekend for the Lancashire team after a 7-3 home success.

Chelmsford Chieftains retained their NIHL1 South title with a 5-1 win at Cardiff NIHL1, but Bracknell Hornets put a dampener on the celebrations the following day as they recorded a 2-1 success at the Riverside.

Sean Scarborough (2) & Steven Fisher (2) led the scoring for Streatham Redskins in their 7-4 win at home to Invicta Dynamos. Wightlink Raiders won 5-1`at London Raiders, MK Thunder beat Cardiff 5-0 and Oxford City Stars boosted their hopes of avoiding relegation with a 4-4 draw at Bracknell.

Slough Jets maintained their 100% NIHL2S record with a 3-2 win at Haringey Racers. Basingstoke Buffalo won 9-2 at home to Wightlink Tigers and 4-1 in the reverse fixture. Bristol Pitbulls won 5-2 on home ice against Swindon Wildcats NIHL and Chelmsford Warriors enjoyed a 6-1 home success against Invicta Mustangs.

EPL champions Telford Tigers’ 13-game unbeaten run came to an end as they fell 6-3 at MK Lightning. Guildford Flames secured second place with a 4-3 win at home to Manchester Phoenix. Flames couldn’t follow up as they lost 5-4 at Peterborough Phantoms.

Ciaran Long scored four for Basingstoke in their 8-4 victory at Swindon Wildcats, and Bison made it a four-point weekend with a 6-4 home success against MK Lightning. Sheffield Steeldogs lost 4-3 after overtime at Peterborough and 4-1 on home ice against Swindon. Bracknell Bees slipped to a 5-4 loss at Manchester.

Just two points separate the top three in the Elite League heading into the final week. Sheffield Steelers lead Braehead Clan by a point, with Cardiff Devils a further point behind. The Welsh team have a game in hand on their two rivals.

Sheffield started the week with an 11-0 win at home to Cardiff and followed up with a 2-0 victory against Coventry Blaze. Devils bounced back with a 5-4 success at Hull Stingrays and gained their revenge on the Steelers back on home ice with a 6-3 victory.

Braehead won 5-1 at home to Edinburgh Capitals, but their title hopes suffered a blow as they lost 2-1 in the return game. Nottingham Panthers picked up four points from their double-header at Belfast Giants, winning 3-2 after a shoot-out and 5-1.

Hull had mixed luck in shoot-outs, winning 5-4 at home to Edinburgh but falling 3-2 at Coventry. Ryan Grimshaw grabbed the decider for Dundee Stars in their 4-3 shoot-out success at Fife, but Flyers gained their revenge in the return game with an impressive 8-4 victory.