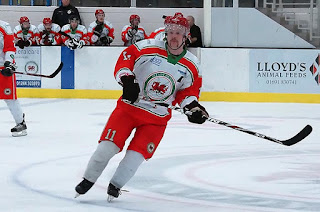 NIHL1 North leaders Solway Sharks still hold a three point lead over Billingham Stars after both won at the weekend. Sharks followed up their 16-1 Trans-Pennine East/West Trophy win over Deeside Dragons with a 3-0 victory at Trafford Metros, while Stars beat Sheffield Spartans 7-1. Blackburn Hawks stay third after a 4-3 home win against Trafford & a 4-1 success at Whitley Warriors. Sutton Sting are in the final play-off position after winning 5-2 at home to Telford Titans.

Nottingham Lions are four points clear at the top of NIHL2 North after a 4-1 win at home to Sheffield Senators – Joe Wightman scored twice. Solihull Barons are up to second after beating Hull Stingrays 8-2 – Chris Allen (3) led the scoring. Shaun Kippin (above) scored his first ever senior hat-trick as Deeside kept their promotion hopes alive with a 16-1 home win over Fylde Flyers.

Romford Raiders extended their lead at the top of NIHL1 South after a thriller against Chelmsford. The Chieftains look set to take the win as they led 5-4 going into the final minute, but Matt Turner’s strike nine seconds from time sealed a vital point for Romford.

Basingstoke Bison stay top of the EPL after securing a four-point weekend. Greg Owen scored twice in their 6-2 win at Slough Jets, and Joe Miller hit a pair as they edged past Sheffield Steeldogs 6-4. Guildford Flames remain in the title hunt after beating Bracknell Bees 3-2 – Curtis Huppe got the shoot-out winner. Leigh Jamieson bagged a brace in MK Lightning’s 5-4 win at home to Slough. Jonas Hoog scored the winner for Swindon Wildcats in their 3-2 win at Telford Tigers, while Ondrej Lauko’s hat-trick helped Peterborough Phantoms to a 5-4 success at home to Bracknell.

Nottingham Panthers still lead the way in the Elite League following a mixed week. They slumped to a shock 2-1 home defeat to Edinburgh Capitals, but bounced back with a 3-1 win at Hull Stingrays and followed up with a 6-1 home demolition of Belfast. The Giants stay in the title mix after a 4-1 win at home to Cardiff Devils.