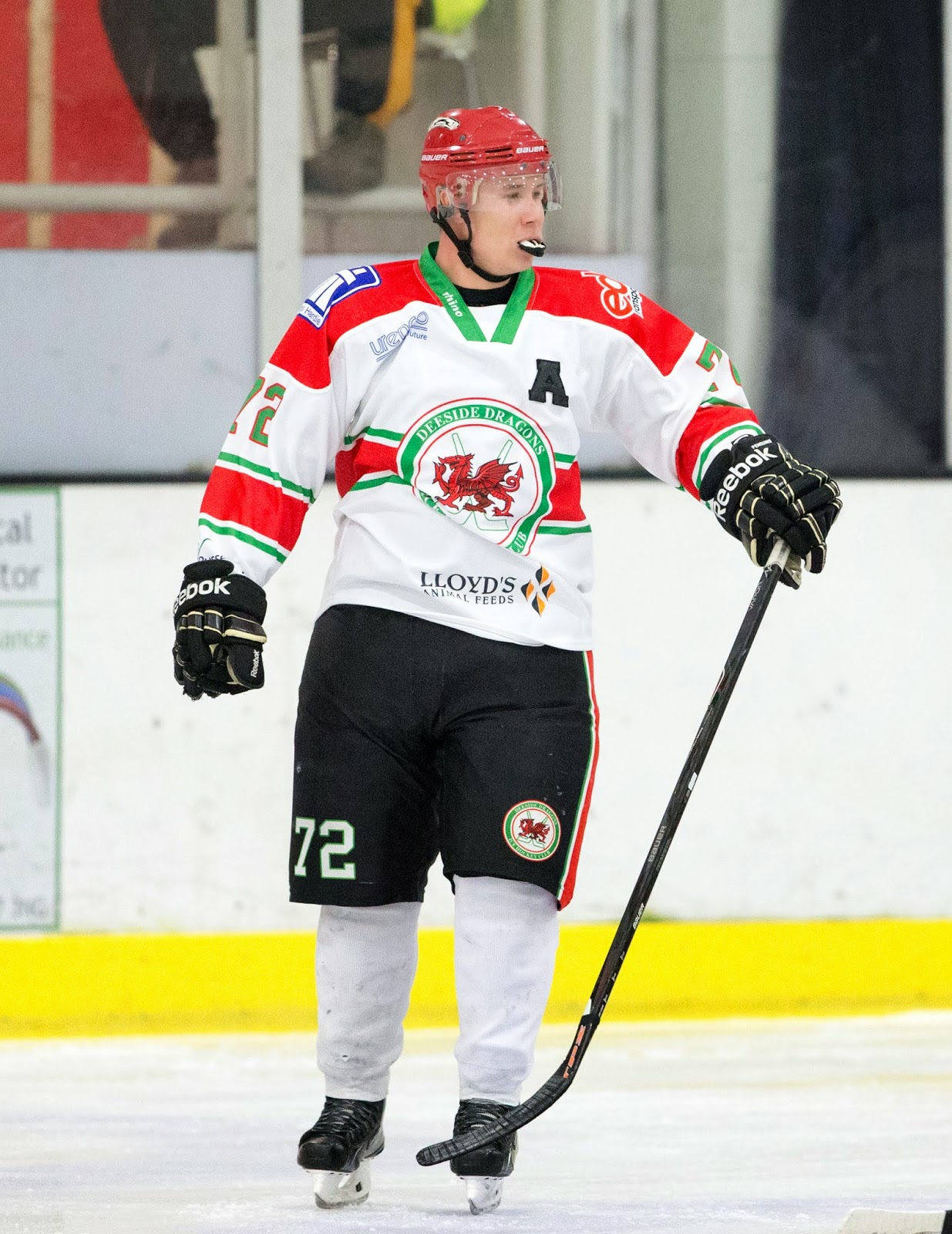 In the British Challenge Cup, Solway Sharks fell 10-2 at Manchester Phoenix and Billingham Stars lost 10-1 at home to Sheffield Steeldogs.

Telford Tigers NIHL boosted their promotion hopes with a four-point weekend. James Smith scored twice in their 5-1 home victory against Coventry Blaze, while Karol Jets & Joe Aston both scored two in a 6-0 win at Sheffield Senators.

Sens held on to second place with a 4-3 win at home to Widnes. Deeside enjoyed a 7-5 home success against Blackburn Eagles – Chris Jones (above) scored four for the Dragons. Nottingham Lions won 7-1 on home ice against Hull Jets.

Chelmsford Chieftains moved two points clear at the top of NIHL1 South with a pair of victories. Chieftains won 6-4 at London Raiders and followed up with a 2-0 home success against Wightlink Raiders.

Streatham Redskins stay second after a 7-1 win at Solent Devils, while Invicta Dynamos move into third after a 9-3 success at Cardiff NIHL1 and a 2-1 victory at home to MK Thunder. Alex Murray’s hat-trick goal in the final minute sealed a 6-5 win for Solent at Wightlink. Oxford City Stars won 2-1 against MK Thunder.

Slough Jets retained their 100% record in NIHL2S with an 8-2 win at Invicta Mustangs. Peterborough Islanders won 10-2 against the Mustangs, while Basingstoke Buffalo won by the odd goal in three at home to Cardiff NIHL2.

In the D2 Cup, Chelmsford Warriors won 5-3 at home to Swindon Wildcats NIHL and 4-2 at Bristol Pitbulls. Wightlink Tigers fell 4-3 on home ice against Haringey Racers.

Telford Tigers are eight points clear at the top of the EPL after another successful weekend. Tigers won 6-3 at MK Lightning and followed up with a 6-1 home victory against Basingstoke Bison. Two Aaron Connolly goals kept Bison in second place after a 2-1 win at home to Swindon Wildcats.

Guildford Flames had a miserable time on the road, losing 5-4 at Peterborough Phantoms and 5-3 at Manchester Phoenix. Phantoms also won 2-0 at Bracknell Bees. Sheffield Steeldogs lost 4-3 at Bracknell and Swindon fell 3-1 at home to MK Lightning.

Evan Cheverie sent Belfast Giants back to the top of the Elite League with the decider in a 2-1 home success against Nottingham Panthers. Sheffield Steelers enjoyed a productive weekend on home ice, after a 4-2 win against the Giants and a 4-1 victory over Braehead Clan.

Cardiff Devils won 3-2 after a shoot-out at Nottingham and 5-4 at home to Dundee Stars. Chris Auger hit a hat-trick for Fife Flyers in their 6-2 home success against Braehead, but they failed to follow up after slipping to a 4-3 defeat at Edinburgh. That result sealed a rare four-point weekend for the Capitals who also won 3-2 at Dundee.

In the Elite Challenge Cup, Coventry Blaze won 4-3 at home to Hull Stingrays, but fell by the same scoreline after a shoot-out in the reverse fixture.