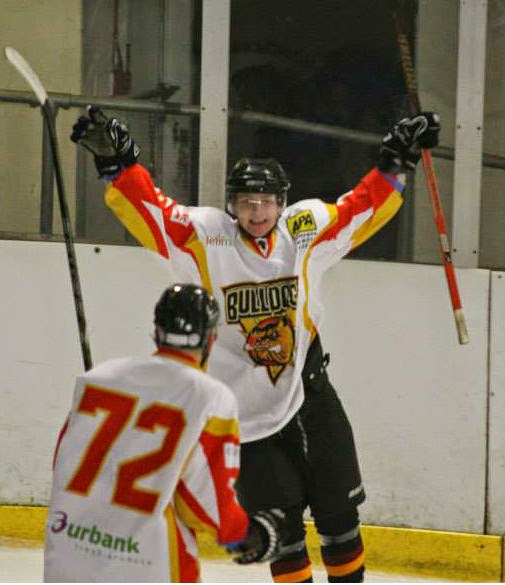 Chelmsford Chieftains moved level on points with Invicta Dynamos at the top of NIHL1 South after a four-point weekend.

Martin Piecha (4) led the scoring in Chieftains’ 9-1 win at home to Cardiff NIHL1 and they followed up with a 10-4 success at Solent Devils.

Streatham Redskins and London Raiders fought out two entertaining games over the weekend.

Jakub Kostelansky & Jacob Ranson both scored two in London’s 6-3 win on home ice, and Raiders looked to be on their way to another victory as they raced into a 5-0 lead in the reverse fixture.

Redskins had other ideas as they battled back to claim a stunning 6-5 win – Steven Fisher (4) & Jakub Klima (2) got the goals.

Invicta slipped to a 6-4 defeat at Solent, but bounced back with a 5-1 win at home to Wightlink Raiders. Jamie Line’s second of the night secured a 4-4 draw for Bracknell Hornets at home to MK Thunder and they followed up with a 5-0 success in the return game. Oxford City Stars lost 10-5 at Wightlink and 7-6 at Cardiff.

Sheffield Spartans boosted their NIHLN Moralee D1 play-off hopes with a 6-2 win at Whitley Warriors – Ollie Barron scored a couple. Chris Sykes (4) led the way for Billingham Stars as they cruised to a 12-0 home success against Manchester Minotaurs.

Slav Movko scored twice for Sutton Sting in their 4-3 victory at home to Whitley. Blackburn Hawks won 7-0 at Manchester and followed up with an 8-2 home success against Peterborough Phantoms in the British Challenge Cup. Solway Sharks failed to add to last week’s win against the Phantoms as they lost 4-2 on home ice against the EPL outfit.

Tom Humphries hit a hat-trick for Sheffield Senators in their impressive 4-2 win at Telford Tigers NIHL. Declan Pearson grabbed the winner for Hull Jets as they defeated Deeside Dragons 4-3. Bradford Bulldogs picked up their first points of the season with a 5-4 success at home to Coventry Blaze – Ryan Tomlinson (above) sealed the win in the final minute.

Telford Tigers still lead the EPL after a pair of wins. Tigers secured a 5-3 victory at Swindon Wildcats and came from behind on home ice to defeat Basingstoke Bison 6-5. Tomasz Malasinski hit the winner for Swindon in their 3-2 win at Bracknell Bees.

Guildford Flames also collected four points, winning 5-1 at Sheffield Steeldogs and 6-4 at home to MK Lightning. Milan Kostourek scored three for Lightning in their 8-4 home win against Bracknell. Manchester Phoenix lost 3-2 at Basingstoke, but recovered to win 2-1 at Sheffield.

Braehead Clan stay top of the Elite League after a 6-2 home win against Dundee Stars. Nottingham Panthers had a mixed weekend, winning 5-0 at home to Coventry Blaze before crashing 7-2 at Cardiff Devils. Tyson Marsh scored twice for Devils in their 5-0 victory at Coventry.

Mike Kompon hit the shoot-out decider for Belfast in their 1-0 win at Sheffield Steelers and Giants followed up with a 6-3 success at Edinburgh Capitals. Steelers also lost 3-2 after a shoot-out at Dundee. Fife Flyers lost 6-3 at home to Hull Stingrays, but gained their revenge with a 3-2 road win in the reverse fixture.

Sheffield are through to the Elite Challenge Cup semi-final after completing a 14-1 aggregate success against Dundee. Cardiff also progressed after defeating Belfast 8-5 overall, whilst Braehead lead Coventry 3-1 after the first leg of their quarter-final.