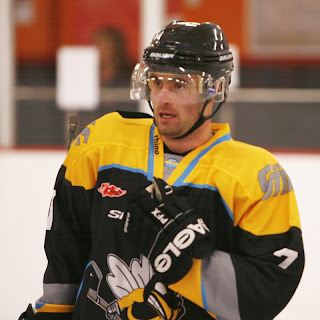 Solway Sharks extended their lead at the top of NIHL North (Moralee Conference) with a 35-1 win at home to Telford Titans. The result is subject to a League Management Committee review as Titans travelled short-benched. The visitors didn’t leave Dumfries empty-handed, as they secured the St Andrew’s Cup in a penalty shootout competition after the game.

Whitley Warriors are up to third after a 7-5 win at home to Sheffield Spartans. Sutton Sting leapfrogged Blackburn Hawks into fifth with a 5-1 victory – goals by Jamie Spurr, Ryan Johnson, Thomas Stuart-Dant, Matt Jeffcock and a fine Mark Turner (left) solo effort sealed the points.

Joe Henry scored a couple as Solihull Barons closed the gap on Laidler Conference leaders Deeside Dragons with a 5-2 victory. Josh Nicklin (4) & Charlie Hammerton (3) were amongst the goals as Coventry Blaze sealed a 10-3 win against Blackburn Eagles. Hull Jets won 5-2 at Widnes Wild.

Chelmsford Chieftains extended their lead at the top of NIHL1 South with a pair of wins. Matt Turner (2) & Daniel Volrab (2) led the scoring in their 10-1 win at Streatham Redskins, while Gary Clarke hit a hat-trick in a 5-2 home success against Wightlink. The Raiders picked up a win of their own with a 6-3 victory at home to Invicta Dynamos. London Raiders secured four points from their weekend double-header with Solent & Gosport Devils, winning 4-2 at home and 3-2 on the road. Cardiff Devils won 4-3 at Bracknell Hornets and 6-2 at home to MK Thunder.

EPL leaders Guildford Flames slipped to a 6-4 loss at Basingstoke Bison, but they bounced back with a 3-0 home win over MK Lightning. Michal Psurny and Robin Kovar both scored twice as Manchester beat Bracknell Bees 7-3, but Phoenix failed to follow up in the return game as they lost 7-2 – Bees’ forward Matt Foord hit a hat-trick.

Belfast Giants still lead the Elite League after a 4-1 win at Dundee Stars. Braehead Clan lost 5-4 after overtime at home to Edinburgh Capitals and 4-3 after a shoot-out at Hull Stingrays. David Clarke’s hat-trick helped Nottingham Panthers to a 4-1 win against Edinburgh Capitals. Panthers followed up with a 5-0 defeat at Cardiff Devils, but they bounced back to win 3-2 in the reverse fixture.

Sheffield Steelers beat Fife Flyers 3-2. Coventry Blaze lost 3-0 at Dundee, but recovered to win 4-2 at Fife. They ended the week with a 5-4 overtime defeat at Edinburgh. In the Challenge Cup Sheffield beat Hull 2-1.