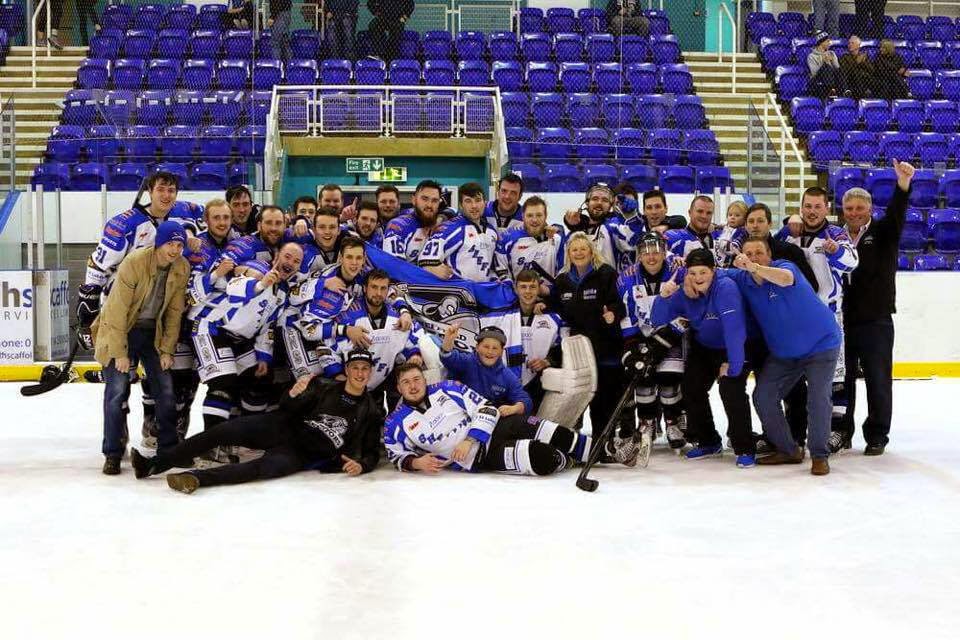 Tom Humphries (5) & Nathan Britton (4) led the scoring for Sheffield Senators (left) as they sealed promotion from NIHL North Laidler D2 with a 21-0 victory at home to Bradford Bulldogs.

Widnes Wild tightened their grip on the promotion play-off slot with two home victories. Daniel Bracegirdle hit the winner in a 2-1 success against Deeside Dragons and Wild followed up with a 9-2 victory against Blackburn Eagles – Filip Supa scored five.

Solihull Barons retained their 100% record with a 6-5 win at Deeside. Telford Tigers NIHL won 9-2 at Bradford and picked up another point with a 2-2 draw at Nottingham Lions. Hamish Hall and Connor Glossop both scored twice for Lions in their 6-1 win at Coventry Blaze. Hull Jets lost 6-3 against the Eagles.

Chelmsford Chieftains are through to the NIHL1S Cup Final after coming through a thrilling battle with Streatham Redskins. Chieftains held a 4-3 lead after the first leg in Streatham, but the Redskins refused to lie down in the return as they took the game to overtime with the aggregate score tied at 8-8.

After a scoreless extra period the game went to a shoot-out with Chieftains’ Matt Turner grabbing the decider. The Essex outfit will face Invicta Dynamos in the final after their 9-6 aggregate success against Wightlink Raiders.

Slough Jets are still undefeated in NIHL2S after a 7-0 victory at home to Peterborough Islanders. Chelmsford Warriors won 7-3 at Haringey Racers.

Telford Tigers secured the EPL title with a 5-4 win at Peterborough Phantoms. They celebrated their success in style back on home ice with a 7-1 success against Basingstoke Bison.

Guildford Flames lost 5-4 after a shoot-out at Basingstoke, but bounced back with a 4-3 overtime win on home ice against MK Lightning. Manchester Phoenix had a miserable weekend, losing 5-4 at MK Lightning and 5-3 at home to Peterborough.

Aaron Nell hit a hat-trick for Swindon Wildcats in their 5-1 home success against Bracknell Bees. Tom Squires scored twice for Sheffield Steeldogs in their 5-1 victory at home to Bracknell.

Braehead Clan moved three points clear at the top of the Elite League after a pair of home wins. Clan won 4-2 against Nottingham Panthers and followed up with a 5-2 success against Fife Flyers.

Sheffield Steelers won 9-2 at Hull Stingrays, but their title hopes suffered a blow as they fell 5-3 at Coventry Blaze. Cardiff Devils are still in the mix after winning 3-2 at home to Belfast Giants.

Dundee won 3-2 on home ice against Nottingham, but Stars failed to make it a four-point weekend as they slipped to a 4-3 shoot-out loss at Hull. Belfast won 3-2 at home to Hull. Edinburgh Capitals had a disappointing weekend, losing 5-1 at Fife and 5-3 at home to Nottingham.

Steelers are through to the Elite Challenge Cup Final after a stunning comeback against the Panthers. Trailing 3-1 after the first leg, Steelers triumphed 6-4 in the return to send the game to overtime.

Neither team could find a goal in the extra session, leaving Tomas Petruska to decide the game with the only successful shoot-out marker. Steelers will face Cardiff in the final after they sealed a 9-4 overall victory against Coventry.