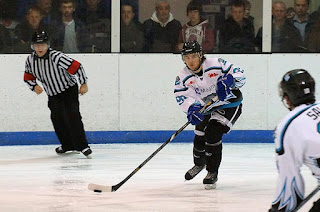 Sharks also extended their lead at the top of NIHL1 North to five points with a 3-3 draw at home to Blackburn Hawks – Dave Meikle grabbed the visitors’ equaliser with five seconds left. Sutton Sting boosted their play-off hopes with a 5-4 win at Sheffield Spartans – Richie Oliver hit the winner in the final minute.

Nottingham Lions are three points clear at the top of NIHL2 North after a 4-2 win at Deeside Dragons. Sheffield Senators stay in the promotion hunt after beating Fylde Flyers 5-2, while Solihull Barons kept up the pressure with a 3-2 win at Hull Stingrays.

NIHL1 South leaders Romford Raiders remain level on points with Chelmsford Chieftains, after they slipped to a shock 4-2 defeat at Streatham Redskins. Wightlink Raiders are a point behind in third after an 8-2 win at home to Bracknell Hornets.

Guildford Flames stay top of the EPL after a 4-2 win at home to Sheffield Steeldogs. Basingstoke Bison had a mixed weekend – winning 3-1 at home to Manchester Phoenix, before crashing to a 5-1 loss at Bracknell Bees. Phoenix failed to bounce back as they fell 4-3 at home to Peterborough Phantoms – James Ferrara hit the overtime winner. Slough Jets enjoyed a pair of wins – 7-0 at home to Sheffield and 4-3 at Telford Tigers. Aaron Nell hit a hat-trick for Swindon Wildcats in their 5-4 win at MK Lightning.

Reigning Elite League champions Belfast Giants have closed the gap on Nottingham Panthers to just two points after a trio of wins. Giants ran out 3-0 winners against Fife Flyers and followed up with a hard fought 5-4 victory in Nottingham. They completed their six-point haul with a 2-0 success at Coventry Blaze. Panthers recovered in style to record a 4-2 win at Sheffield, but the Steelers remain in the title mix after a win by the same score at home to Coventry.