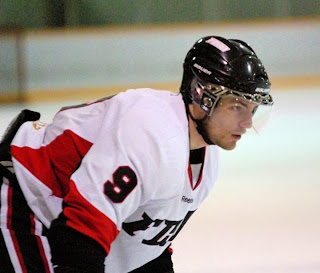 Billingham Stars bounced back from their derby loss at Whitley Warriors with a four point weekend in NIHL1 North (Moralee Conference). Two Michael Elder goals helped them to a 4-1 win at Sheffield Spartans, and they followed up with a 3-1 home success over Manchester Minotaurs.

Scott Robson’s late stunner crowned Blackburn Hawks’ 4-2 win at Manchester, while Adam Brittle scored his first goal for the club in a 6-0 victory over Sheffield. Thomas Stuart-Dant (left) was amongst the points as Sutton Sting came from behind to win 12-6 against Telford Titans.

Deeside Dragons maintained their 100% start in NIHL2 North (Laidler Conference) with a 10-7 win at home to Widnes Wild. Josh Nicklin and Rhys Gillatt hit hat-tricks as Coventry won 10-0 at Blackburn Eagles, while Philip Pollok’s trio helped Blaze to a 7-1 win at home to Nottingham Lions. Solihull Barons beat Sheffield Senators 12-0, while Hull Jets won 6-2 at home to the Eagles.

Manchester Phoenix retained their unbeaten record in the EPL with a pair of wins over Slough Jets. Liam Chong scored twice in their 4-2 win at Slough, while Frantisek Bakrlik grabbed two in a 3-2 success on home ice. Guildford slipped to a 5-4 overtime loss at MK Lightning, but they bounced back with a 7-6 win at home to Sheffield Steeldogs – Jozef Kohut hit a hat-trick for Flames.

Jonas Hoog and Henri Sandvik both scored twice in Swindon’s 5-1 win at home to Telford Tigers and Hoog followed up with the shoot-out winner as the Wildcats beat Peterborough 4-3. Phantoms also lost 4-3 at Sheffield. Basingstoke Bison beat Bracknell Bees 3-1, while Joe Greener scored twice in their 3-2 win at Telford. Bracknell are yet to pick up a point after they fell 6-2 at home to MK Lightning.

Elite League leaders Dundee lost for the first time this season as they lost 5-3 at Belfast Giants. Stars regained the winning thread with a 7-0 shut-out over Cardiff Devils. Ash Goldie hit the winner as Braehead Clan won 5-4 after a shoot-out at Sheffield Steelers. Edinburgh Capitals won 5-3 at Hull Stingrays, while Fife Flyers slipped to a 2-1 shoot-out defeat at home to Coventry Blaze.