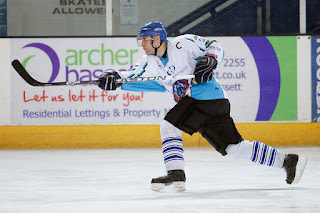 Billingham Stars are just a point behind Solway Sharks at the top of NIHL1 North after a comfortable 8-2 win at home to Trafford Metros. Sutton Sting boosted their play-off hopes with a 5-1 home win over Sheffield Spartans and a 5-5 draw with Coventry. Two goals from Gareth Owen (left) helped Blaze to a 6-2 win at home to Whitley Warriors. Telford Titans had a mixed weekend, beating Blackburn Hawks 4-2 but falling 6-2 at Sheffield.

In the NIHL South Cup, Billy Phillips’ late winner helped Romford Raiders to a 3-2 win at Bracknell Hornets and they followed up with a 7-6 win in the return on home ice. Chelmsford won 6-1 at MK Thunder – Danny Hammond scored twice.

Basingstoke Bison still lead the EPL after another pair of wins. Greg Owen’s goal secured a 1-0 win at home to Guildford Flames, while Joe Greener bagged a brace in their 5-1 win at Telford Tigers. Derek Campbell scored twice as Manchester Phoenix downed Sheffield Steeldogs and they followed up with a 4-3 win at Slough Jets – Tony Hand hit the winner in the last minute. Phoenix completed a successful week with a 3-2 shoot-out win at Peterborough Phantoms – Bari McKenzie got the winner. Darius Pliskauskas hit the shoot-out winner as Slough won 6-5 at Bracknell Bees. The Steeldogs miserable form continued as they lost 3-2 at home to Peterborough and 5-2 at Guildford.

Elite League leaders Nottingham Panthers racked up another four-point weekend, winning 7-1 at home to Fife Flyers and 8-0 at Coventry Blaze. Belfast Giants stay in touch after a 4-1 victory at Coventry Blaze and a 2-1 win at Sheffield Steelers – Darryl Lloyd got both goals. Cardiff Devils are up to third after a 6-2 win at Braehead Clan and a 2-1 overtime win at home to Hull Stingrays – Mac Faulkner bagged the winner. Derek Keller hit the shoot-out winner for Fife as they won 4-3 at Dundee Stars. Edinburgh Capitals continued their recent good form with a 5-2 win at home to Dundee, while Hull lost 4-2 at home to the Steelers. In the Challenge Cup Quarter-final 1st leg Belfast won 3-1 at Hull.